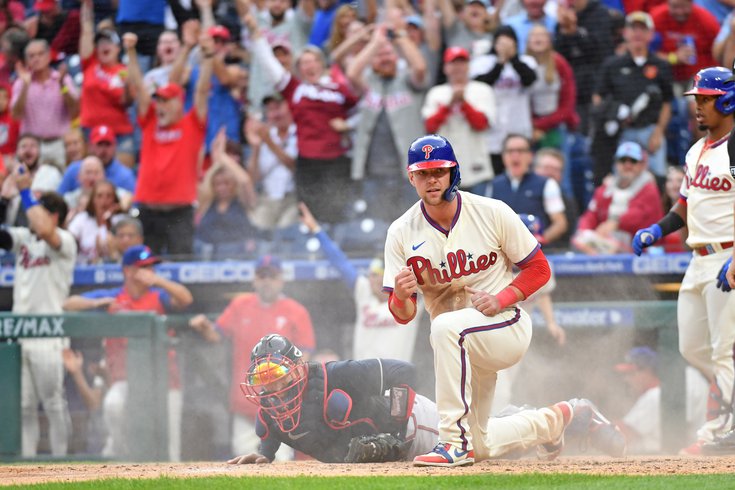 The Phillies managed a series split against the Braves this weekend to close out their home slate, and it was a performance that seemed simultaneously reassuring and worrisome.

Reassuring because they showed they can hang with Atlanta, at least a little bit, after being swept in their recent prior series against their division foes. The Phillies looked at times dominant in a Game 1 shutout and 9-1 offensive explosion in Game 2 — and knowing the team can win in both ways against one of the best teams in baseball is very nice to see.

But that they lost the final two games of the series is concurrently worrying, particularly after they had several chances to win a 11-inning marathon Sunday afternoon, blowing multiple leads.

Here's a look at some of the major takeaways as the Phillies prepare for their final 10 games on the road:

• Ranger Suarez and Aaron Nola combined for two of the most impressive starts of the season. Suarez anchored a nail-biting 1-0 win back on Thursday, tight-roping his usual bend-don't-break pitching before Zach Eflin and Jose Alvarado slammed the door shut in the final three frames. Having Eflin in the pen (as well as Noah Syndergaard) certainly makes the bullpen a little more trustworthy and reliable heading into a potential postseason berth.

Then on Friday came Nola, who was gifted a nine-run lead and kept the Braves to just four hits in his six innings. The Nola start is particularly good to see, as the ace has been known to pitch much worse in September. With two starts left it would be nice to see Nola end his regular season campaign on a high note.

• Bryce Harper's home run in Saturday's loss (helping the Phillies make a push back into the game after trailing by six) was his third since returning from his thumb injury and first since September 14. Harper has struggled after rushing back to the field. He's hit .204 in August and September with only 13 RBI through 26 games. In his 64 games prior to the injury he had 48 RBI and a .318 average (and repeat MVP buzz).

If the Phillies want to make any noise whatsoever in the playoffs Harper will need to find a way to contribute on offense. Perhaps he may be due for a day or two off over the season's final two weeks?

• Rhys Hoskins is an interesting figure for the Phillies right now. He's not an All-Star, but he's an above-average position player whose long term fate with the team could come down to the front office's ability to make a meaningful open market upgrade this offseason.

Against the Braves, he was the offensive MVP, hitting .411 with seven hits and four RBI in the four game series. Getting hot in September is a very good recipe for job security long term and if he continues to rake with the bat, he may play his way into the 2023 picture.

• The Phillies hold a 1.5 game lead over the Brewers for the final NL Wild Card spot and trail the Padres by another 1.5 games for the second Wild Card spot. If the playoff started today (they don't), the Phils would play the Cardinals in St. Louis in a three-game series. The Priority for the Phils is obviously finding a way to clinch a playoff spot, though the Cards are arguably the most desirable of the three potential foes they may face (the Braves, Mets or Cardinals).

• The Phillies will open a three-game series in Chicago Tuesday, as Zack Wheeler and Aaron Nola will kick things off against the Cubs, who are 19 games below .500. Suarez will get the nod in the series finale, the only matinee of the series (2:20 p.m.) on Thursday.

Following this series, Philly will head to Washington for four games against the lowly Nationals. With a magic number of eight, there's a reasonably good chance the Phillies can clinch their playoff spot before they travel to Houston for the regular season finale next week.