Work will begin Monday and continue through the end of July 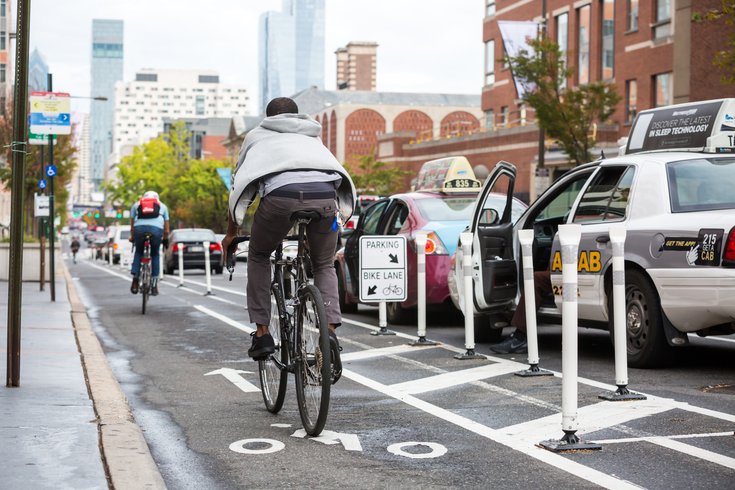 Philadelphia's 22nd Street is considered a Vision Zero High Injury Network corridor, meaning there is a higher-than-average rate of severe crashes. Planned improvements include a protected bike lane like the one above.

The Philadelphia Streets Department plans for the work to begin Monday and continue in phases through July. The project will include temporary street closures and may be impacted by weather and special events.

Below are some of the key features of the project:

• Moving the bicycle lane from the right side to the left side of street.

• Installing a protected bike lane with a parking buffer from Washington Street to South Street and with flexible delineator posts from South Street to Market Street.

• Installing new intersection treatments to designate bicycle and vehicle space in the roadway.

The city selected 22nd Street for improvements because it was labeled a Vision Zero High Injury Network corridor, with a higher rate of severe crashes than an average Philadelphia street.

The goals of the project include reducing the number of crashes that occur between right-turning vehicles and bicyclists. The city also aims to smooth out conflict points between SEPTA buses and bicyclists.

Road surfacing will be completed in three phases – street milling, the adjustment of manhole covers and resetting of utility boxes, and final paving. All work will be performed between 7 a.m. and 5 p.m.

Operations for the milling work, the removal of old asphalt, is expected to last approximately 1-2 days per block.

Work for adjusting manhole covers and resetting utility boxes is expected to last about one week per block.

Operations for the final paving is expected to last approximately 1-2 days per block.

"No Parking" signs will be posted in advance of scheduled work. Cars will be subject to towing if they are not removed from work areas during the hours specified on the signs. Parking will be allowed in these areas during non-work hours.

If a car is towed, residents should contact their local police district to determine its location. The work will run through the First, Ninth an 17th districts.

The project is being completed by James J. Anderson Construction Co, Inc. and is funded by the city and federal government.