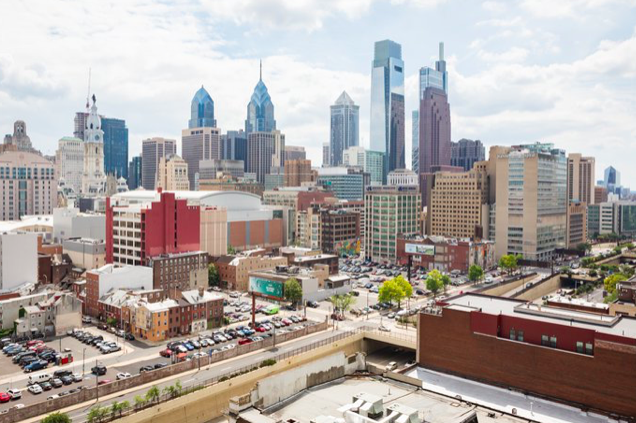 Earth Day arrives on a somber note this year, as the world remains gripped by the coronavirus pandemic, which has infected more than 2.6 million people and claimed more than 183,000 lives as of April 22.

Large gatherings to celebrate the planet are out of the question this year.

Still, one outcome of the stay-at-home orders in place across the globe is a measurable decline in air pollution, particularly in large cities that serve as industrial centers. It's difficult to call anything amid this crisis a bright spot – knowing it has come at the expense of lives and economics – but experts believe there is something to be learned about the environment from all of this.

The Philadelphia Department of Public Health released a report Wednesday demonstrating that air quality has improved and there have been reductions in the levels of nitrogen dioxide, fine particulate matter and carbon monoxide.

Nitrogen dioxide, which creates ozone and infiltrates the air when fuels are burned, is down 22% in Philadelphia since Pennsylvania Gov. Tom Wolf imposed statewide mitigation orders for COVID-19 on March 17, according to the report.

Fine particulate matter, a mixture of solid particles and liquid droplets found in the air, is down 18% during the same period.

Carbon monoxide, which is generated most commonly by vehicle emissions, decreased by about 25% since the governor's orders took effect.

Philadelphia's Air Management Services compared all three metrics to the same March 17-April 17 period in 2019 to determine their respective declines.

All of these pollutants are frequently linked to a range of health problems, including asthma, respiratory infections and cardiovascular disease.

"While it is understood that maintaining this level of shutdown is inadvisable and dangerous, the Health Department maintains that there is something to be learned from it," the report said. "Reducing the number of cars and trucks on the road and the amount of pollution from industrial point sources pays dividends in air quality."

Similar changes have been noted in other parts of the world, as reflected in a report by Swiss manufacturer and air quality monitor AirIQ. A review of fine particulate matter levels around the world found sharp reductions when comparing the 2020 lockdown period to the same period in 2019. 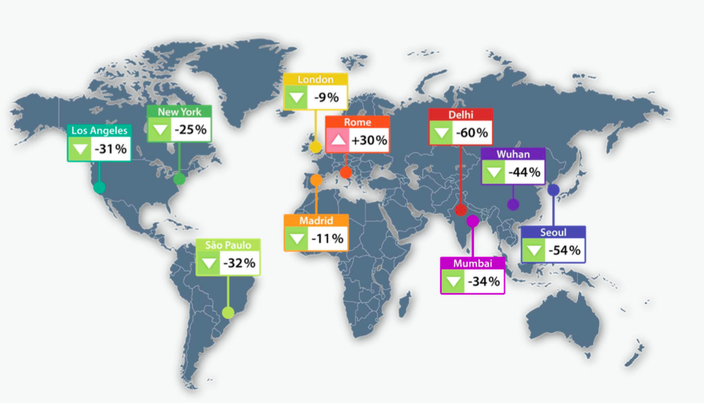 The 30% increase found in Rome may be attributable to higher reliance on residential heating systems during the health crisis, according to the report. Measurements can be highly sensitive to patterns in consumption and meteorological conditions, requiring further analysis of pollution levels over time.

In China, which endured the worst of the coronavirus from December to March, major declines in nitrogen dioxide levels were detected in aerial measures of lower atmosphere pollution. These findings also can be influenced by weather patterns, but the stark changes appear to be linked to the country's lockdowns, experts say.

A new animation showing the variation of nitrogen dioxide emissions over #China (Dec-March) – thanks to @CopernicusEU #Sentinel5P data.
Sentinel-5P currently provides the most accurate measurements of NO2 and other trace gases from space.
ℹ️https://t.co/Gn9mvSnIu6 pic.twitter.com/nDLrboKnXG

Globally, there is a growing recognition that the health crisis will offer an unprecedented look at the degree to which changes in economic activity affect air quality. These findings could play important roles in developing future policies to protect the environment, promote public health and understand more precisely the balance between industrial regulation and climate change.

Philadelphia plans to use the air quality findings from this period as a tool to study how adjustments can be encouraged in public transit and work arrangements moving into the future.

Officials said one of the city's plans to reduce its environmental footprint will have to wait, however.

Philadelphia's pending ban on single-use plastic bags, originally set to take effect on July 2, will be put off until Jan. 1, 2021 as a result of the coronavirus pandemic.

"This is not an announcement we want to make during Earth Week. We know the climate crisis and plastic pollution remain two very serious threats to our planet and society, even during the global pandemic," the city said in a blog post on Wednesday. "However, we realize that this law will only be successful if there is widespread messaging to our diverse business owners, effective enforcement, and most importantly, partnership among all stakeholders and communities."