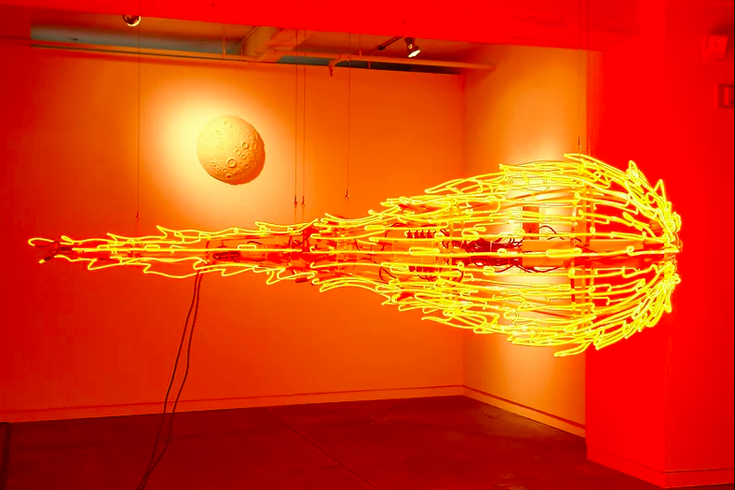 Tristan Lowe's 'Comet: God Particle' from 2011 is pictured above. The artist's new exhibit 'Black Holes and Rabbit Holes' is opening at The Galleries at Moore on Saturday, Jan. 22.

Multi-disciplinary artist Tristin Lowe's style can be hard to define, but he says "absurd" and "surreal" are two words that could describe most of his work.

Whether it's a rendition of Frosty the Snowman made from copper tubing and plastic jugs, a giant three-dimensional comet made of neon tubes or half of an old car hung from the ceiling of a gallery, he's always doing something unexpected.

Starting Saturday, Jan. 22, an array of sculptures and other art projects collected during Lowe's decades-long career will be on display at Moore College of Art and Design's The Galleries at Moore, at 1916 Race St.

Although many of the pieces have been shown in other exhibits over the years, Lowe is excited to endow them with a new perspective by placing them in the varied spaces available to him at Moore. His work will be taking over the entire gallery through March 19.

One piece that will be there is "Frosty." The deconstructed snowman's head is made of copper tubing coated with insulation and his body is made of three empty plastic tubs. He wears a pork pie hat and has a cigar in his month, but the most interesting element of the sculpture is perhaps the large freezer behind the snowman which he's connected to with a thick tangle of wires and cords.

"I look at that kind of thing as a metaphor for what one tries to do with art," Lowe, a Philadelphia resident, said of the original Frosty the Snowman story, in which a group of children imagine him into existence. "You're rubbing a couple sticks together, and you're hoping it sparks some kind of transformation and breathes life into something."

Another highlight Lowe has picked out is his piece "Comet." He's made several versions of the scultpure over the years, mostly out of neon-filled glass pipes, but the one that'll be featured in Moore is particularly large at 14 feet long. There will also be a 13-foot-wide felt moon in the exhibit.

Lowe has a penchant for making sculptures of disembodied legs clad in blue jeans. Some are realistic and proportional but others are super long and squiggly, extra tall or fused together in strange ways.

Lowe bisected is old car, a 2001 Volkswagen Passat Wagon, the vehicle in which he had a near-death experience while driving in November 2015. The piece is titled "Transmutation: Into the Wind." Passat means "trade wind" in German.

The artist had been driving back from a work trip in North Carolina, where he was preparing for an exhibit. He was on Route 113 near Dover, Delaware, at about 9 p.m. when a woman driving the wrong way with her lights off slammed into the passenger side of Lowe's VW.

He survived the crash without any major injuries and was discharged from the hospital a few hours later, but the traumatizing experience shook Lowe to his core. He felt a strong connection with the car, so much so that he actually bought it back from the insurance company so he could bring it home.

"I had this weird relationship with the car," he said. "I felt like it saved my life."

He spent hours getting the car into his studio through its 30-inch doorway piece by piece and then crawling around the vehicle and cutting it up, becoming intimately familiar with every facet of the old Volkswagen's remains.

By January 2016, he had reassembled the back half of the vehicle and installed it on the ceiling of Temple University's art gallery where it stayed for about two weeks. On Jan. 22, the vehicle that may have saved Lowe will hang from the ceiling of The Galleries at Moore.

The gallery will hold an opening reception for the exhibit from 5 p.m. to 7 on Friday, Feb. 4.