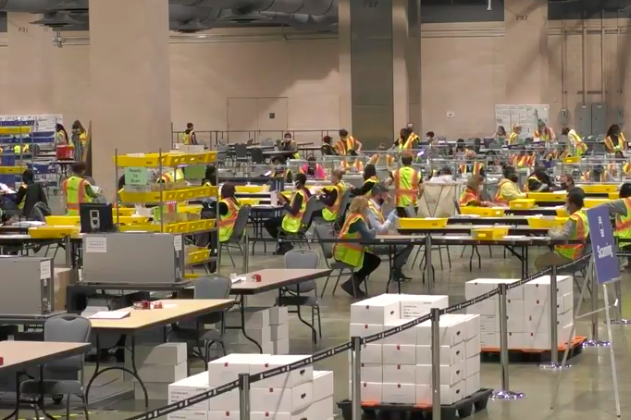 Philadelphia election workers are set up inside the Pennsylvania Convention Center, sorting and counting ballots in the 2020 election. A livestream of their progress is running on YouTube from a camera placed by Philadelphia City Commissioners.

The pandemonium of the 2020 election is probably better summed up by a long, resounding shriek than any intelligible string of words.

More than 94 million mail-in ballots across the United States are in the midst of being processed, in addition to millions of votes cast electronically and an assortment of provisional paper ballots used for various complicating factors in this year's vote.

Then there are America's election workers, selflessly committed to ensuring that a free and fair election can be pulled off in 2020, despite a pandemic and a cyclone of potential legal challenges. They've been at the polls, they're counting ballots, they're handling administrative work.

Count among them the U.S. Postal Service workers who today were ordered by a federal judge to conduct sweeps in battleground states to guarantee the delivery of any remaining mail-in ballots that could be identified. The last-ditch effort is predictably a disaster thus far, meaning many mail-in ballots in states with hard Nov. 3 deadlines won't be counted. But the workers trying to make it happen deserve credit.

Earlier this summer, the non-profit Democracy Works put together projections on the number of poll workers the United States would need for the November election, assuming staff shortages as a result of the pandemic and fewer polling places due to the unprecedented scale of mail-in voting.

About 1.17 million U.S. poll workers were needed to make this election happen, including about 8,430 in Philadelphia alone.

Amid all the rhetoric and spin and unbearable opinions raining down in the finale of this election, the poll workers ought to be celebrated for their sacrifices in 2020.

Nothing better encapsulates this — and American democracy at work — than the Philadelphia City Commissioners' livestream of the ballot-counting process. If you're searching for a moment of humdrum peace in all of tonight's anxious prognostication, you can find it right here.