In his shorts and Dickies work shirt, John Fetterman is comfortable as candidate

Bob and Barbara’s, the dive bar on South Street, is rather full for a grey, quiet Monday evening. Dozens of drinkers are packed into the narrow confines of the bar, although there’s more breathing room than on a typical Thursday drag show.

This early-week crowd is here for John Fetterman, mayor of the tiny southwest Pennsylvania town of Braddock and candidate for the U.S. Senate. A win in November 2016 would take the 6-foot-8 inch former offensive tackle from representing a borough of 2,159 to a commonwealth of 12.7 million residents. But Fetterman seems unperturbed by the substantial difference in scale. He basically just wants a bigger bully pulpit.

“I think the Senate can afford an incredible platform,” says Fetterman, standing outside Bob and Barbara’s to greet the curious and the thirsty alike. “And I don’t see enough people in leadership fighting against inequality, or for gay rights, or legalizing marijuana, too many wimping out on climate change.”

Standing out on South Street, towering over passersby, Fetterman doesn’t look the part of an aspiring senator. The upper chamber is known for having a preening regard for its own supposed majesty. Dressed in grey cargo shorts, a black Dickies work shirt, black Adidas sneakers, and sporting a wiry goatee, Fetterman refuses to even consider buying a suit. Succumbing to pressures to don senatorial plumage, he feels, would be a betrayal of himself and his constituents.

But he doesn’t cast himself as an anti-D.C. radical either.

“I’m not going to say if you send me to Washington I’m going to go down there to chew bubble gum and kick ass, but I’m all out of bubblegum,” Fetterman told the PhillyVoice. “That’d be disingenuous, that’d be pandering. If you like Bernie Sanders and the work he’s doing, just add the kind of hands-on work I’ve been doing for the last 14 years and that’s the package I’m bringing here.”

Inside Bob and Barbara’s, floor-to-ceiling vintage Pabst advertisements are bathed in the usual red and yellow lighting. The crowd is stiff with political consultants and staffers, curious to hear what the new candidate has to say for himself. Fetterman is only the latest to enter a primary field that includes party leadership favorite Katie McGinty and former Congressman Joe Sestak, a liberal who came within two points of defeating sitting Sen. Pat Toomey in the Republican wave election year of 2010. All three are relatively liberal, although the other two contenders hail from the state’s southeastern, Philadelphia-centric Democratic stronghold.

“I was intrigued when I heard about him on WHYY, and I’m not too enthusiastic about the other two candidates,” says Byron C. Mayes, who questioned Fetterman after his speech. “He seems genuine, he seems to have some great ideas, and he has the benefit of 'the look' and 'the Harvard. [Fetterman graduated from Harvard’s Kennedy School of Government]. In the current year, when you have Trump and Bernie Sanders, an outsider can really do something.”

Fetterman’s speech to the crowd focused on his own story, from a son of privilege in Central Pennsylvania’s York to a life-changing experience in Big Brothers, Big Sisters. His volunteer service with the non-profit revealed to him the extent of America’s disparities and the price of inequality, made tangible when the child he mentored lost both parents to AIDs.

“I have two graduate degrees and zero student loan debt and that’s not because I was special or super-intelligent,” Fetterman told the crowd. “That’s because I was lucky. It’s the random lottery of birth in this country and that determines how successful you are going to be in education. That’s not fair. Creating more opportunities for young people from communities like mine is a moral imperative.” 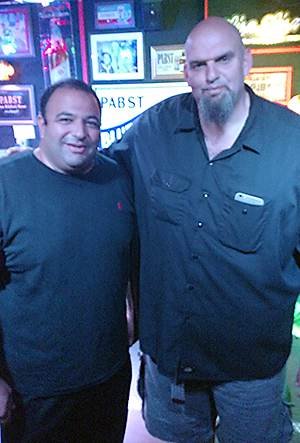 Fetterman then fielded questions about Planned Parenthood, gun control, Social Security (he supports lifting the payroll tax cap) and marijuana – which he said he would legalize, to a single, raucous yell from the audience. Despite talk of bipartisanship and the need for dialogue, most of his positions were deeply progressive and would find few, if any, supporters in the national Republican Party.

Don Sabatini, seen at left with the candidate, was Fetterman’s roommate and teammate at Albright College in Reading. He came to Bob and Barbara's even though he hadn’t seen Fetterman in more than 20 years, after seeing a post about the event on Facebook.

“I was defensive tackle, he was offensive tackle, but I remember he slimmed down to 275 for the coach,” remembers Sabatini, who lives in South Philadelphia. “But now he looks like he weighs back what he used to. He was also conservative when I was his roommate, which is obviously different.”

“What’d you get knocked on the head or something?” Sabatini later joked with the candidate. Fetterman merely rolled his shoulders: “Times change.”

That’s a sentiment his potential colleagues will no doubt agree with, if the resolutely suit-less Fetterman ever makes it to Washington.