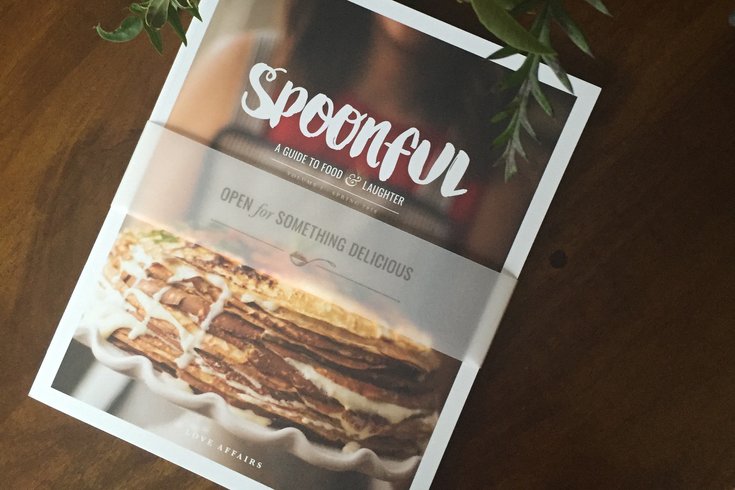 The first issue of Spoonful Magazine.

Hold on to your chefs' hats: a new food magazine focused on cooking and entertaining is launching in -- where else? -- Philadelphia, a city that loves a good meal. Spoonful Magazine, an independent quarterly print publication, officially kicks off with a private shindig at J.G. Domestic Saturday, Jan. 16.

Dubbed "A Guide to Food & Laughter, " Spoonful is the brainchild of local writer Kristina Erfe Pines, its editor-in-chief. Sara Ann Kelly of SAK Public Relations, Philly food writer Emily Teel and Melissa Alam of Femme & Fortune and The Hive, are all on board as well. The other half of the brand's creative team is Chicago-based.

Issues will be released during each spring, summer, fall and holiday season, beginning with the inaugural spring issue. The content will focus on how people gather around and interact with food, including recipes ranging from breakfast, lunch and dinner to quick snacks and drinks, Sara Ann Kelly said.

"We really like to highlight the different types of gatherings people are already having," Kelly, communications director, said ahead of Spoonful's launch.

Unlike many print magazines, Spoonful will be ad-free, swapping in-book advertisements for partnerships with artisanal brands and makers.

So far the magazine has collaborated with over 20 writers from all over the country and they plan to expand to international contributors soon. At the start, Spoonful Magazine will be distributed in cities like Philadelphia, Denver, New York and San Francisco, but they hope to be distributed internationally, too, by the end of the year.

From the brand's Instagram account and Spring 2016 cover, Spoonful's aesthetic is high-end and professional-looking but not stuffy. It has the beauty of a well-heeled glossy mag, but the perfectly-imperfect feel of your favorite lifestyle blogger.

"That can be attributed to the people putting together these features," Kelly said. "It's attainable and inspirational at the same time and we want to help people grow within their entertainment skill sets."

The brand's online component, SpoonfulMag.com, is on the cusp of its own launch. Its content will update more frequently than the print publication, but will have the same look and feel.

Once the site has made its debut, local foodies will want to keep an eye out not only for new stories but for event announcements, too. Spoonful plans to host community dinners along with each issue to highlight their brand partners and to practice what they preach: bringing people together over food.