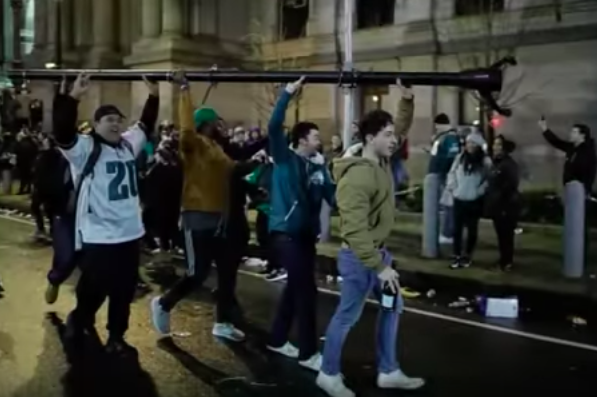 Philadelphia police are seeking a number of people involved in several vandalism cases linked to the aftermath of the Eagles' Super Bowl win.

Philadelphia police asked the public for more help on Tuesday in finding revelers involved with multiple cases of vandalism in the aftermath of the Eagles' first Super Bowl win.

Three videos posted by police to YouTube show pictures or footage from each incident.

Two of the videos center on vandalism that took place after the Eagles dispatched the New England Patriots in a 41-33 thriller on Feb. 4.

One shows pictures of fans taking down and carrying signs or poles in Center City.

Another combines two videos obtained by police of two alleged thefts of traffic lights at Juniper and Market streets.

One woman is shown holding a traffic light and yelling "I'm stealing it!"

In the other clip, a man in a kelly green Eagles jersey is shown holding a crosswalk sign and talks to the camera, appearing to say, "We're gonna tear this whole city apart."

The third shows a clip from the day of the celebration parade on Thursday, police said.

The video, obtained by police, shows a group of fans standing and jumping on a woman's 1985 white Chevrolet Corvette, which was parked at Judson Street and Pennsylvania Avenue. The vehicle had extensive body damage to the hood and roof, police said.

Anyone with information is asked to contact the police department's Central Detective Division.