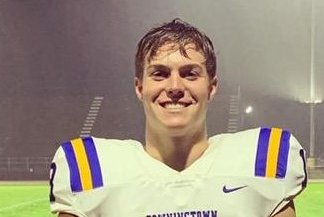 Will Howard has been waiting for this week's game all year,

Will Howard missed the last one, but he’s certainly not going to miss this one. The talented, 6-foot-4, 225-pound Downingtown West senior quarterback, who is headed to Kansas State, watched the Whippets played arch rival Downingtown East last year from the sidelines with a broken right arm.

Friday night, Howard gets the chance to meet his arch rival in a mega-game at Downingtown’s Walter E. Kottmeyer Stadium at 7 p.m. (both teams share the stadium, but West will be the away team tonight).

The last time Howard played the Cougars was in his sophomore year, and West was a young team that started 11 sophomores. West finished 5-5 that season, which included a loss to East.

That West sophomore core are now seniors and they’re 6-0 — as is East. The last time both teams were undefeated when they played each other was Week 10 during the 2015 season, when both were 9-0. That time, East won, 21-14.

The last time West won a Ches-Mont League National Division title was in 2013. The Whippets had to beat rival East to do it —and sitting in the stands that night was Howard, who was in sixth grade.

Last year, Howard suffered a broken right forearm, just above the wrist, in Game No. 7 last year — missing the Whippets’ game against East. Still, West finished 11-2 and reached the PIAA District 1 6A semifinals losing to North Penn, the District 1 6A runner-up.

Howard, who carries a weighted 4.4 GPA, is ranked among the top 1-percent of his class and garnered Ivy League attention, wants to make up for the time he lost. He’s on his way.

Downingtown West is the No. 1 team in District 1 6A (large schools), with Downingtown East, coached by the legendary Mike Matta, right there at No. 2. The rival Chester County schools are among five District 1 6A schools still undefeated.

“We expected to be here, so this isn’t a surprise to us,” said Howard, who’s completed 61 of 101 passes this season for 1,034 yards and 14 touchdowns against just one interception. “As a team, we feel we have one of the strongest teams in the state, and that’s because this group has been playing together and grown together for a while.

“I feel like our success will continue. But I lost to East my sophomore year, but we beat them last year. So, personally, I’ve never beaten East. It’s going to be mobbed tonight. I can’t wait. I have been in big games before, so this isn’t my first rodeo with big games. I believe in my team and I’ll lock in, and from there, everything will take care of itself.”

The Whippets have outscored their opponents, 255 points to 82. East has outscored its six opponents 224-58.

“This senior class has been together for three years now, and we have some star power, but they’re all motivated and driven players,” West coach Mike Milano said. “Will has been back and healthy for a while, playing varsity basketball last winter. Will is a great kid and a great leader.

The winner of this showdown will definitely have a better course in the PIAA District 1 6A playoffs. Both teams are talented. Both teams are well coached, with West’s Mike Milano and East’s Mike Matta very familiar with one another. The difference may be West’s Will Howard. There are not many high school programs in the state with a difference-maker like the 6-foot-4, 225-pound senior.

This civil war will come down to execution. There is nothing either team can hide for the other.

“We know each other pretty well, and both staffs have been in place since the duration of the split (into Downingtown West and Downingtown East) in 2003,” West coach Mike Milano said. “With Mike and I, I always say we get too much credit and when something goes wrong, we get too much blame. It will come down to the kids. Right now, I have a strong bunch that can play.”