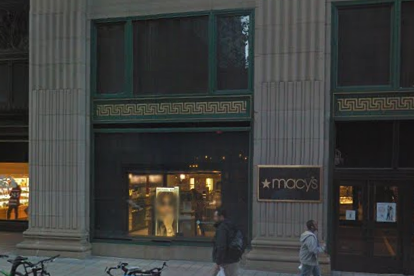 The Macy's in Center City.

A woman fled Macy's in Center City after being caught shoplifting, leaving her 3-year-old daughter behind, according to media reports.

6ABC reports that the incident occurred around 6:10 p.m. Thursday when the 27-year-old woman was taken into custody by security after allegedly stealing $1,400 worth of merchandise.

She was able to free herself from handcuffs, police told the news station, and ran, leaving her young child behind.

A spokesperson for police told the Philadelphia Inquirer that the child was taken to the Department of Human Services and is now in the hands of other family members.

Although police know the woman's identity, they are withholding it at this time because she has not yet been arrested.

She faces theft charges and is currently being sought by authorities. Anyone with information is asked to call police.