The song, 'Adderall (Corvette Corvette)', has been used by celebs like Sasha Obama, Kevin Hart 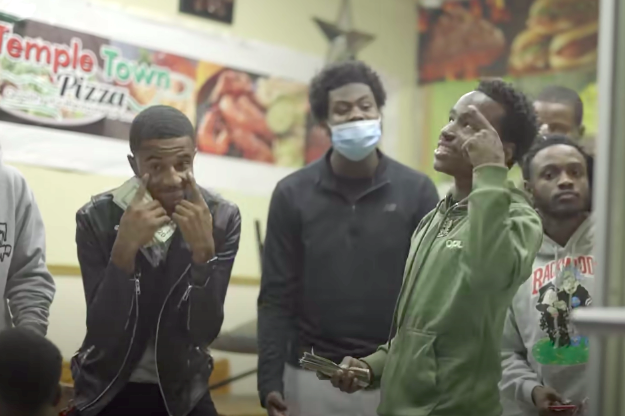 Philly artist Popp Hunna, pictured right, is responsible for the hit TikTok song "Adderall (Corvette, Corvette) which now has over 18.2 million videos on the video-sharing platform, and over 16 million plays on Spotify.

Popp Hunna, an up-and-coming rapper from North Philadelphia, is responsible for the latest song to take TikTok by storm.

Since the single's Oct. 15 release, Popp Hunna's "Adderall (Corvette Corvette)" has been streamed over 16 million times on Spotify and is featured in approximately 18.2 million videos on TikTok, according to the app.

Former first daughter Sasha Obama recently brought even more attention to the track by appearing in her own viral TikTok with friends dancing to the song.

The video was deleted after internet users criticized the 19-year-old, a current student at the University of Michigan, for mouthing a curse word and spending time with a group of young people indoors while not wearing a mask.

A Twitter video of the TikTok can still be viewed below.

Comedian Kevin Hart seemed to enjoy the song as well, posting his own "unique" version of the dance.

Despite his moves, Popp Hunna seemed excited about the fellow Philly native's attempt and shared the video to his Instagram, saying "this is major...#philly."

Popp Hunna, whose style is now being compared to elusive megastar Playboi Carti, didn't have a major release under his belt until 2019 with his song "I'm Single."

"I'm Single" also received attention on TikTok after it was included on the artist's debut album "One Year Later" in January, but it has since been used only 1 million times on the platform as of early December. Popp Hunna was featured on the YouTube channel Genius in April, where he talked about the song.

On the heels of his late 2020 success, the artist just released his latest single "Take Off" on Tuesday, Dec. 7. The song is available for streaming on Spotify and the video, which was filmed in Philadelphia, can be viewed here.

The Philadelphia rapper is still mostly unknown, but he proudly proclaims his Philly roots on his social media platforms.

He also uses the city as the backdrop to the official video for "Adderall (Corvette Corvette)," which features numerous scenes of North Philadelphia, including the restaurant Temple Town Pizza located at 2001 N Gratz St.

Watch the video for Pop Hunna's song below.