Nancy Volpe Beringer, 65, stayed on for another episode last night, further advancing her in the contest. 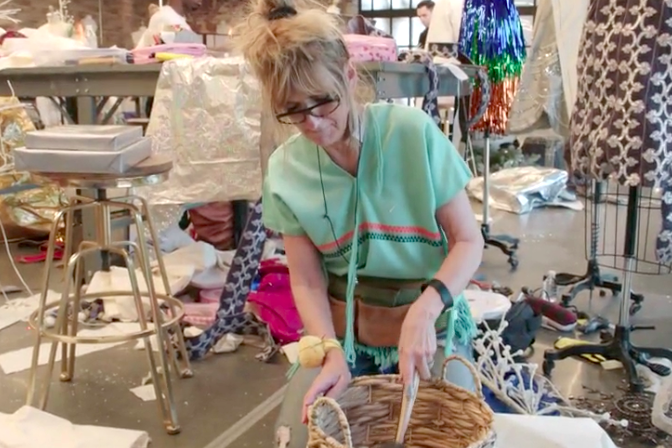 Beringer entered the fashion/competition/reality TV show along with West Philly designer Asma Bibi, who designs clothing for her label Hijabi Pop. She was eliminated in the first episode, but the Beringer remains on as the show's oldest designer to ever compete.

Nancy Volpe Beringer, 65, is the oldest and only remaining Philadelphia contestant on this season of Bravo's "Project Runway."

Beringer began Season 18 of the competitive fashion show along with West Philly designer Asma Bibi, 31, who designs clothing for her label Hijabi Pop. She was eliminated in the first episode.

Eight episodes have passed since then, and Beringer is still sticking around. The designer told WHYY that she's stayed on the show this long "by keeping her head down, focusing on her work, and staying away from infighting." But Beringer is not completely exempt from the show's notorious drama.

And even though the other remaining contestants are half her age, she has less clothes designing experience than most on the show.

Beringer only started in the fashion world in 2013, when she was 58. She had raised two adult sons and decided she wanted to pursue a full-time creative career. So she to quit her job quit her job working for the New Jersey Education Association and enrolled at Drexel University. Beringer graduated with a master's degree in fashion design in 2016.

Since, Beringer also has designed an outfit for Drexel President John Fry's wife and other custom pieces for clients. And she sells clothes on her website.

Another Philly contestant, Renee Hill from Season 17, and Beringer met Wednesday in New York and both hinted that a collaboration between the two of them might be in store.

Look!!! I met someone famous today!!!! Finally got to meet one of my @projectrunwaybravo Favs! @nancyvolpeberinger - Stay tuned for something special 👀

Thursday night's episode put Beringer in the clear, as she was not eliminated and is staying on for another episode.

Project Runway will air again next Thursday night, Feb. 6 on Bravo at 9 p.m.