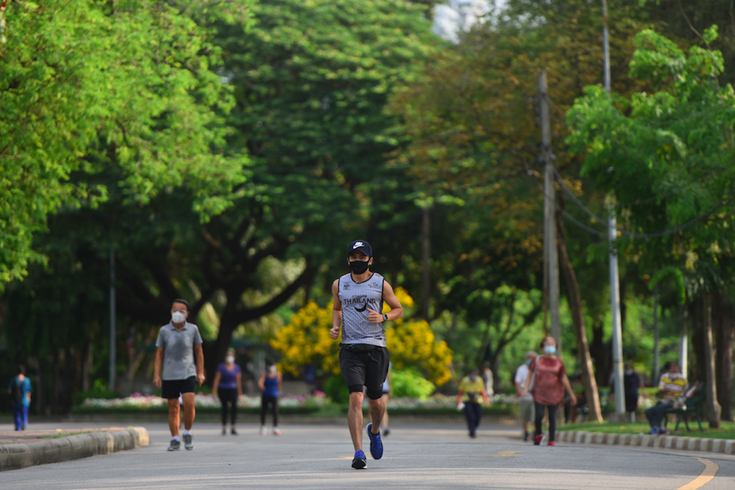 Running outside during the summer can be challenging on its own, thanks to the stifling combination of heat and humidity.

Now, try doing it with a face mask.

Public health officials continue to urge people to wear cloth masks whenever they leave their homes, including when they exercise. That recommendation seems unlikely to change before the weather heats up.

It's an adjustment doctors say most people can handle with some precautions.

"The average person probably will be fine when they go to do their routine exercise with a mask on," said Dr. Margot Savoy, chair of family and community medicine at Temple University's Lewis Katz School of Medicine. "But they do need to know that they're probably going to get tired faster, and they're probably going to have to back off a bit until their body gets acclimated."

Wearing a mask may limit the intake of air, and some people may experience some resistance breathing depending on the thickness of the material, doctors say. This could make exercising feel more difficult.

Exactly how much someone needs to dial down their workout will depend on the person, said Dr. David B. Gealt, assistant director of sports medicine at Cooper University Health Care.

"If you're having trouble breathing or straining a little bit more than you're used to, you might want to modify things," Gealt said. "Breathing through a mask can be a little more uncomfortable."

Masks will retain more moisture when someone is breathing hard, and mucus can accumulate, Gealt added. They may irritate the skin. And they may cause glasses to fog up, particularly if the seal loosens.

But he said masks won't increase the risk of heat stroke; hydration plays a bigger factor in that. The recommendation to wear a mask should not prevent people from exercising, Gealt said.

"The average person probably will be fine when they go to do their routine exercise with a mask on, but they do need to know that they're probably going to get tired faster ..."
– Dr. Margot Savoy, Temple Medicine

"You want to make sure you exercise," Gealt said. "If you're not with people, it's not mandatory to wear a mask, but it's probably a good idea to have one with you. ... You can at least put it on temporarily so that you're safe and other people are safe too."

Still, people who have been lounging on the couch during the coronavirus crisis may find exercising with a mask particularly challenging, Savoy said. She worries people will over-exert themselves as they try to get back in shape.

Savoy particularly cautioned people with underlying medical conditions – like those with heart disease, COPD or asthma – to take it easy.

"They want to be very, very careful," Savoy said. "They're already going to be feeling somewhat short of breath just because they have the mask on. The only caveat I give to that is that, if you're an asthmatic person who has been running miles for years and years, you're probably going to be fine. You've just got to watch yourself."

Studies have found training masks do not provide the same benefits as altitude training despite making exercise more difficult. That's because the benefits of altitude training – an increase in VO2 max and red blood cells, which help the body better use oxygen – are mostly gained by living at high altitude.

"If you're not with people, it's not mandatory to wear a mask, but it's probably a good idea to have one with you. ... You can at least put it on temporarily so that you're safe and other people are safe too."
– Dr. David B. Gealt, Cooper University Health Care

And while research shows masks strengthen pulmonary muscles, experts question whether diverting more oxygen-rich blood into the lungs is actually beneficial. That means less goes to the skeletal muscles being used.

"Whether (strengthening the diaphragm and pulmonary muscles) is a good thing is a big question, because the pulmonary system is rarely your limiting factor," exercise physiologist Shawn Arent, now at the University of South Carolina, previously told Vice. "At normal conditions, you tend to actually over-breathe at high intensities. We have a breathing reserve."

Regardless, masks may end up becoming a crucial workout accessory, just like sneakers and gym shorts, at least for the foreseeable future.

It's likely that many gyms will require people to wear masks, whenever they reopen. Equipment may be set farther apart to reduce the spread of the coronavirus, too. And for good reason.

Running with exertion can send air droplets flying up to 12 feet, forming a so-called "running cloud," Gealt said. That's double the six-foot gap recommended in most social distancing guidelines. And it's why wearing a mask – and keeping physical distance from others – while exercising is so important, Gealt said.

"If you're struggling or having issues," Gealt said, "you may want to modify your workout or go somewhere where there isn't anyone, so you don't have to wear one."