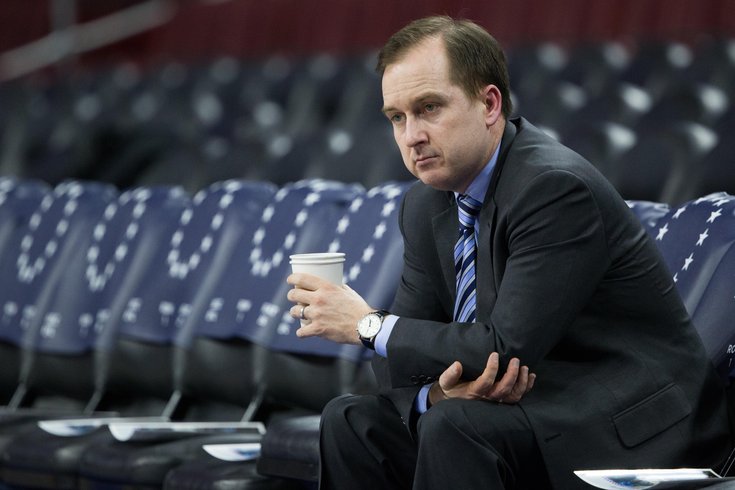 The debate surrounding former Sixers GM Sam Hinkie remains either fascinating or annoying, depending on how much of a stomach you have for arguments. So long as players like Joel Embiid and Dario Saric are powering Philadelphia's basketball team, there will be a portion of the fanbase that wonders what might have been had he stayed on as GM.

For the most part, Hinkie doesn't seem hyper-concerned with basketball these days, which was made clear by an appearance on the Invest Like the Best podcast on Tuesday, hosted by investor Patrick O'Shaughnessy. I would be lying to you if I told you I'd ever heard of it before yesterday, or that I cared all that deeply about listening to people debate the merits of Amazon, Google, and other tech giants.

A lot of Hinkie's appearance on the podcast was indeed focused on those subjects, and if you're the sort of person who is interested in how he thinks beyond basketball, you'll have a lot more fun with the rest of it. But there was still plenty to be gleaned from his brief discussions of basketball throughout the hour, and they lend a little insight into how the Sixers ended up where they were.

The decisions that look easy now, like drafting Embiid to be the anchor of the franchise, were nowhere close to it at the time. Hinkie told O'Shaughnessy that the move he was most proud of during his tenure was that fateful night of the 2014 Draft, which it sounds like all parties were prepared for accordingly.

I went there in 2013 and we had a rough season, we finished with the second-worst record in the league, we ended up getting the third pick. But one of the lights at the end of the tunnel all during the first season — which was very hard, particularly down the stretch — was that we had two lottery picks coming. We had our pick and a pick from New Orleans, so two lottery picks coming, and we would get back [Nerlens Noel] on our team who could help, so that would be all great. Everybody's all excited about that, and there was a bit of hype around that even leading into the draft. Reasonably so for fans, and some of that came from the team, but it was all reasonable stuff about the cavalry's coming.

And we got to draft night and we made a bunch of transactions, but the gist of, at least at the top of the draft, was we drafted one guy that was structurally unavailable to play for the first year, and another guy that was locked in to play in Europe for the next two years. That's [Joel] Embiid and Dario Saric.

Coming in, everyone felt like we're going to get two great players tonight, and it's going to be so much fun at Summer League in a week. And three hours later, we don't have anybody. That was very hard, I was super proud of us for doing that, and proud of ownership for having the courage to be able to do that. We talked about it days ahead of time, that it might go that way and that there was a real possibility this could be our best option, and if it was, did we have the courage to do it? And to [the owners'] everlasting credit, they did, and we did it.

The credit to the owners is rather interesting, given the way Hinkie's tenure in Philadelphia ended. Some of that can probably be boiled down to looking out for his own future — if he wants a chance to work in the league again, blasting his former employer is not the move — but there was not as much across-the-board support for what Hinkie was doing as that complimentary quote makes it seem.

That's a story that would take a lot more detail than a story like this would offer.

True to form on a podcast such as this, Philadelphia's draft-conscious philosophy under Hinkie was explained as only he would choose to, relating the value of building through the draft by applying the draft's inherent logic to other walks of life.

"I think a lot of studies would show draft picks are terribly important, not the least of which is — imagine if Google could come across the street to Stanford and recruit engineers but they got to have them for nine years and no one else could have them," said Hinkie. "That would be pretty powerful. Getting [Mark] Zuckerberg to come join you and not go start Facebook, might be amazing in its own way about what you could do with [an] archetype, someone like him in the fold."

The product of those years of decision-making brought a bunch of players to the city who have built a special connection with the fanbase, even if they don't have the same star-level talent as Embiid. Hinkie discussed a bunch of his former players who he remains a big fan of — he raved about former Rockets guard Kyle Lowry — and did a decent enough job of summing up why the fans love a scrapper like T.J. McConnell.

I have a special place in my heart for a lot of the players we had in Philly, some of which are still there. Joel Embiid and I are still close, I love him and watch on pins and needles when he plays without his mask or something silly happens. T.J. McConnell I love and sort of what he stands for, Robert Covington I love, everywhere he's been ... I like people who have big dreams for themselves in whatever package they're in, and trying to outkick their coverage and overachieve.

What overachieving for T.J. McConnell means is very different than what overachieving for Joel Embiid means because of the gifts that they have. But people who have a real grittiness but don't take themselves too seriously, and are really realistic and are everyday learners, I can't get enough of those people, honestly.

And if you were wondering whether Hinkie would have brought in LeBron James this summer — which continues to be a strangely loud debate in Philadelphia — a quip of his late in the podcast should settle that very quickly.

Heard that. You can listen to the whole podcast here.