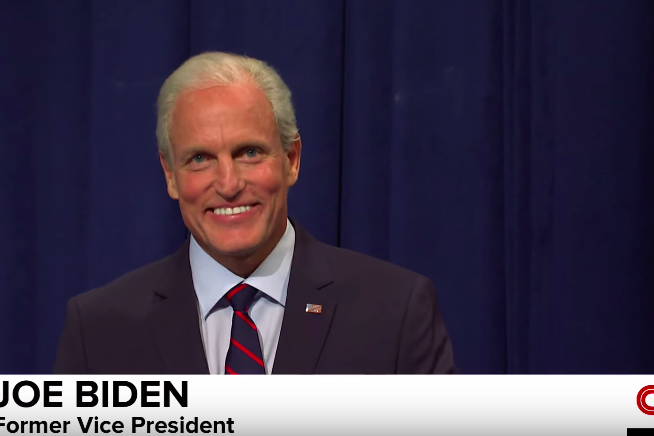 "Saturday Night Live" returned by tackling all the politics it missed over the summer, including a new, creepy Joe Biden impression from host Woody Harrelson.

Impeachment was a theme for the politics on "SNL" Saturday night. The show began with a cold open of Alec Baldwin as President Donald Trump concerned over the "presidential harassment" of the inquiry put forth by Speaker of the House Nancy Pelosi earlier this week.

The sketch comedy show took it one step further in a 10-person mock debate on CNN's Town Hall with the Democratic nominees. Erin Burnett (Cecily Strong) moderated the panel of candidates, separating those with and without a chance, including New Jersey Sen. Cory Booker, who only got five words to speak based on how well he was doing in the polls. Ouch.

The debate then moves to the "actual candidates," a star-studded cast of impersonators, including Larry David as Sen. Bernie Sanders, Maya Rudolph as Sen. Kamala Harris, and Harrelson as Joe Biden.

Harris refers to herself as American's "cool aunt" who also possesses a pizazz for three potential cable crime shows that are coming to TNT and USA this fall. This fun aunt, or "funt," if you will, says that she is "the kind of Funt that will give you weed but then arrest you for having weed."

Harrelson's Biden is, well, a bit creepier than the Jason Sudeikis' take from previous seasons. His capped-tooth grin is met with a blasé, and totally not creepy introduction to himself, "There's no need to worry anymore: Daddy's here, America. I see you, I hear you, I sniff you, and I hug you from behind."

He ends by noting that he doesn't really understand all the criticism, adding, "Look, I'm like a plastic straw. I've been around forever. I always worked but now you're mad at me."