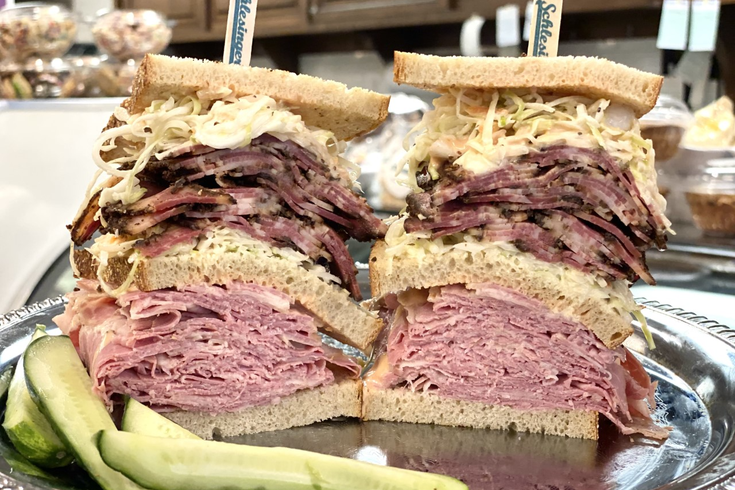 The $39 sandwich from Schlesinger’s Delicatessen will have corned beef, pastrami, a half cup of coleslaw and a generous serving of thousand island dressing on three slices of rye bread.

An old school Jewish deli in Rittenhouse Square is selling sandwiches named after Ukrainian President Volodymyr Zelenskyy to raise money for those being impacted by the war in Ukraine.

The $39 'Zelenskyy' sandwich from Schlesinger’s Delicatessen, which is owned by Councilman Allan Domb, is similar to a reuben. It has 14 ounces each of corned beef and pastrami, a half cup of coleslaw and a generous serving of thousand island dressing on three slices of rye bread.

All of the proceeds will be donated to the Wild Dove Foundation, a charity started by Ukrainian Temple University student Kateryna Koshevoy.

The organization is focused on providing transportation, shelter and other essentials to those fleeing the war zone and has already completed more than half of its $50,000 fundraising goal on the website Spotfund.

"So many of my friends and family members have stayed behind to help those in need, putting their own lives in danger," Koshevoy said in a press release. "I couldn’t just sit and watch what was happening in my country."

Koshevoy has used the charity's social media platform to share footage of supplies being delivered and notes of gratitude from those receiving them.

“Everything that has been happening in Ukraine has been absolutely tragic, and we, like many other businesses around the world, have been looking for a way to support the victims,” he said.

Schlesinger’s is open seven days a week from 7:30 a.m. to 7 p.m. In addition to its signature giant sandwiches, the restaurant has matzo ball soup, bagels and lox and a pickle bar.

Those types of traditional Eastern European Ashkenazi fare may be familiar to Zelenskyy, who is Jewish himself.

The roughly 40,000 Jews who lived in Ukraine in 2016 made up less than one percent of the country's population of close to 45 million people.

But before World War II, when nearly 1 million Ukrainian Jews were killed in the Holocaust – incuding Zelenskyy's great-grandparents, the ethno-religious group made up more than 5% of Ukraine's entire population and a third of its urban population.

Many Ukrainian Jews emigrated from the country before World War II and in the Soviet era. Philadelphia is currently home to roughly 1,000 Ukrainian Jews, including 200 Holocaust survivors.