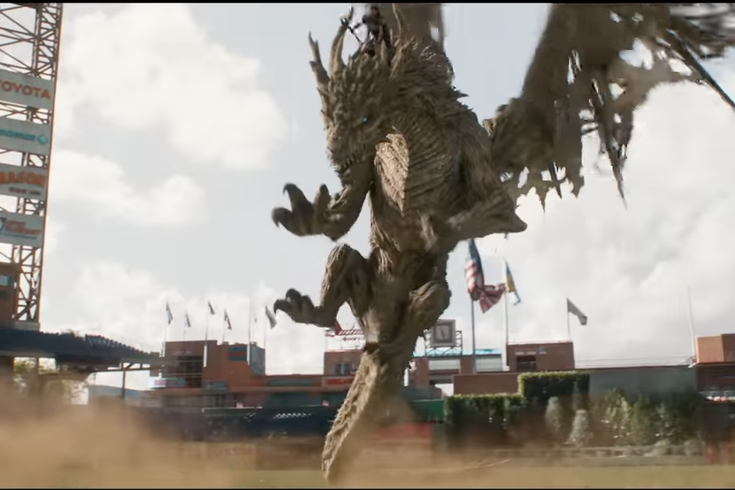 A trailer for 'Shazam: Fury of the Gods' was revealed during San Diego Comic-Con, bringing the unlikely superhero and his foster family back to Philadelphia in the upcoming sequel.

As far as superhero movies go, the DC Extended Universe gave fans a lighthearted and entertaining adventure with 2019's "Shazam!"

Much of the film's action was based in Philadelphia, complete with off-brand SEPTA set pieces and the destruction of the William Penn statue atop City Hall. A few of those scenes were actually shot on location in Philly, including moments outside the Philadelphia Museum of Art and other aerial footage, but the majority of "Shazam!" was filmed in Toronto.

The sequel, "Shazam! Fury of the Gods," is on the way from Warner Bros. later this year — and more Philly scenery will be in the mix.

Over the weekend at San Diego Comic-Con, we got our first look at the sequel directed by David F. Sandberg. The movie's trailer begins with an imposter syndrome rant from Zachary Levi's Shazam, who's still not quite comfortable with his superhero status.

"I don't deserve these powers, if I'm being honest," Shazam whines. "Like, what am I even contributing?"

In the action-packed trailer, we also get a glimpse of Philadelphia's place in the new movie. There's a shot on the Benjamin Franklin Bridge and a fiery scene with a dragon wreaking havoc at Citizens Bank Park in South Philadelphia.

The majority of "Shazam! Fury of the Gods" was filmed in Atlanta, and it's not entirely clear whether the Philly backgrounds shown in the trailer were filmed on location or added in post-production. The movie's IMDb page only lists Atlanta as a filming location.

Adapted from the original Captain Marvel, the premise of the movie series is that a teenager in the foster care system is bestowed with superhero powers by the ancient wizard Shazam. When young Billy Batson speaks or thinks the word "Shazam," he transforms into an adult with superhuman speed, strength and the ability to manipulate electricity. He can also share his powers with his foster siblings as they all work together to fight Dr. Thaddeus Sivana and the Seven Deadly Sins he wields.

In the comics, the story was based in the fictional Fawcett City, but contributing writer Geoff Johns, who co-founded DC Films and has been involved in numerous DCEU projects, decided "Shazam" made sense in Philadelphia because of the character's powers and Benjamin Franklin's kite experiment that helped lay the groundwork for our understanding of lightning and electricity.

The plot in the first film was fleshed out with a humorous script that trades seriousness for self-deprecation, a welcome touch in a genre that sometimes leans too heavily on formula and action.

The first "Shazam" was a box office hit, racking up $366 million during spring of 2019 before the pandemic ravaged movie audiences. On Rotten Tomatoes, the film has a 90% approval rating with an average score of 7.3/10, based on 415 reviews. The audience score is 82%.

Comedic takes on superhero stories have largely connected with audiences in recent years, from Amazon Prime Video's "The Boys" to the action-comedy "Free Guy," starring Ryan Reynolds, which also is getting a sequel. It's a logical place for the genre to go, giving studios the chance to present a more relatable and nuanced look at the lives of superheroes.

If you enjoy seeing Philadelphia on the big screen – or some version of it, at least – you may want to catch up on the first film ahead of the scheduled release of "Shazam! Fury of the Gods" on Dec. 21.