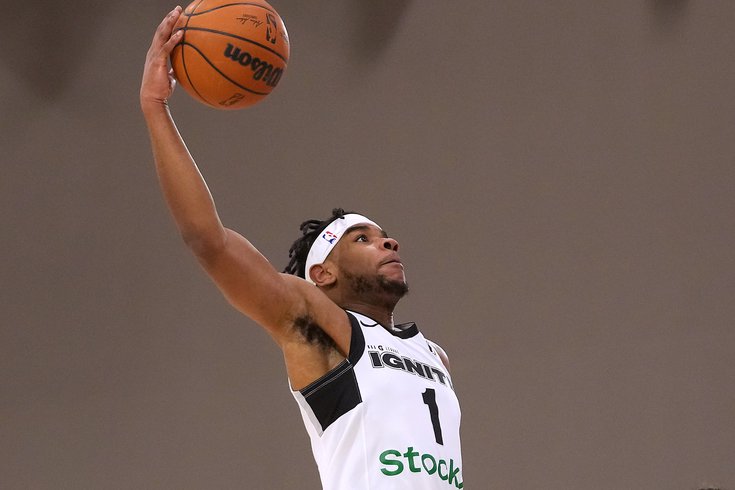 Will the Sixers take a chance on the talented but raw Jaden Hardy at No. 23?

The NBA draft is on Thursday, and thanks to a combination of organizational secrecy, COVID-related changes to the pre-draft process, and the spot they sit in at No. 23, we don't know much for certain about the Sixers' draft plans. If the likeliest outcome is sitting at No. 23 and simply making a selection, it is followed closely by trades of all kinds, either further down the draft board or out of the draft entirely in search of a rotation player.

So long as we're keeping an eye on the draft specifically, it pays to know exactly who they have and haven't shown interest in so far. This does not represent a list of everyone they've seen or spoken to, far from it, but a list of everyone we know for sure has gotten a look of some sort. If there are any developments or more names discovered — even names I have forgotten! — between now and the draft, they will be added and written about in this space.

(Editor's note: players who are outside the top-60 of consensus big boards will not be getting write-ups. It has been hard enough to try to keep tabs on the guys who are likely to be drafted, so with no disrespect intended toward the other guys, I don't have as much to offer on them.)

The rundown: Beauchamp opted against becoming a scholarship player to train with Chameleon BX in San Francisco after his senior year of high school, a plan that was disrupted by the COVID-19 pandemic. Returning to his home state of Washington to play for the local community college team, Beauchamp lit up the (admittedly inferior) competition and eventually found his way to the G-League Ignite this past season, impressing alongside a group of more highly-touted prospects.

Beauchamp has some fluidity as a pull-up shooter, a bit of wiggle off the dribble, and if a team can bring him along on either front, they might get a higher upside player on offense while getting an attractive player on the defensive end. The G-League product has height, wingspan and strength to body up on guys in isolation, which he did plenty of in the G-League against older competition last season. In the days leading into the draft, Beauchamp has also cited defense-first players like Pelicans wing Herb Jones as examples for him to follow, a positive sign of the buy-in you might get from him early in his career.

The rundown: McGowens is a player you'd be betting on because of his on-ball upside rather than his current production. The shot mechanics look clean and his free-throw percentage was encouraging, but he didn't see too many of his attempts go down at Nebraska. Do the Sixers need a player in a creator mold like McGowens, or more of a play-finisher who slides into a role alongside their established stars? There's a pretty credible argument for the latter.

Any guy who can take opposing players off the bounce at 6'7" is going to warrant serious consideration in the first round even when they have other warts. If you're of the mindset that a team should be trying to swing for the fences with a pick in the 20s, hoping to find upside rather than simply getting "a guy," you could do worse than McGowens, who has three-level scorer upside and has already shown flashes of it before turning 20 years old.

The rundown: Unlike some of the other players you see on this list (or have seen mocked to the Sixers elsewhere), you don't have to do as much projecting regarding his scoring ability at the next level. In Branham's lone season at Ohio State, he shot 41.6 percent from deep (admittedly on low-ish volume), shot well at the free-throw line, and showed flashes as a playmaker to complement his scoring ability. Those traits are why he might not be available at No. 23, but he's somebody worth keeping an eye on nonetheless.

Branham is a player that can give you all that and still offer at least a decent floor on the defensive end. One of the youngest players in his class, Branham nonetheless has a solid build (at least up top) and showed he can use that frame effectively on both ends. He profiles well as a secondary ballhandler, which is all Philadelphia would really need him to be in their current setup, with Harden and Tyrese Maxey expected to shoulder a lot of the primary duties.

Concerns for Branham center around his style of play on the offensive end, where he takes (and thankfully makes) a healthy portion of tough pull-up jumpers to get his. His success playing that way and his offensive efficiency in spite of that style lends hope that there is upside in him that will help him potentially outshoot the value of his draft slot, though whether he can win this way against NBA competition is another story. If a team can turn some of his long, contested twos into a healthier diet of threes and still take advantage of his midrange scoring ability, they'll be off to the races.

The rundown: A healthy Patrick Baldwin Jr. might have pushed his way toward a top-10 selection if he had been able to stay on the floor in college. Baldwin went to play for his father at UWM, and he offers a combination of traits that are hard to find in any gym around the world, standing at 6'9" with ballhandling ability and clean shooting mechanics. Scouts who watched him play at international events in his teens look at Baldwin as a guy who can be helpful as a multidimensional role player, with the size and will to be a solid team defender on top of the unique offensive package. So what's the catch?

The trouble with Baldwin is that he already brings a laundry list of health concerns to the table. Baldwin missed most of his senior year of high school as a result of an ankle injury suffered in the second game of that season, and he was able to appear in just 11 games for Wisconsin-Milwaukee in his lone collegiate year. His stats are uninspiring, so a bet on Baldwin would be predicated on prior performance at FIBA events and judgment of his mechanics moreso than his production.

Editor's note: Philadelphia also had an interview with NC State's Terquavion Smith at the combine. Smith decided to pull out of the draft and return to school before the early-entry deadline had passed, and was regarded as a potential first-round candidate by several major outlets.

Players who have been in for workouts

The rundown: Brown may be the best athlete in the entire draft, plays hard, defends well and finishes at a high level at the basket. That sounds like the sort of guy you want on your team, at least if you had confidence he was going to be able to hit threes at the next level. And the Sixers have kept close tabs on him during this process, interviewing him at the combine before having him in as part of a group workout in the week leading into the draft.

The bad news: Brown was below average from deep in his only year at Baylor and shot less than 70 percent from the charity stripe on a paltry 2.2 trips to the line per game. He is also not much of a self-creator, and in the immediate term, that makes him a tricky player to introduce into the Sixers' ecosystem. You can get around being an iffy shooter with fluidity off the bounce, and vice versa, but it's hard to get to respectability without one or the other. It's why Brown finds himself in an uncertain territory as a prospect, being mocked as late as the early second round by a lot of experts after floating around the lottery heading into the season.

On Philadelphia's end, there's still logic to betting on a guy like Brown, who has prototypical tools on the wing. With Harden expected to handle a lot of the creation duties for the Sixers from the perimeter, a player with good cutting instincts (and excellent finishing ability) like Brown has could easily pile up a few easy baskets per game by learning Harden's tempo and cadence. The simplification of his role on offense will allow Brown to really buy and lock in on defense, where he has the potential to be a switchable defender from 1-4 who can play in just about any lineup. The Sixers are in desperate need of players who can add size and athleticism to help them compete with the elite teams in the Eastern Conference, and Brown has no shortage of either.

(The Sixers also interviewed Brown at the combine.)

The rundown: Hardy is viewed as a player with great scoring instincts and upside, though that did not translate to production (or at least efficiency) in the G-League. He was considered a top-five recruit coming out of high school by basically every major recruiting service off the strength of his off-the-dribble scoring. It is also true that Jaden Hardy shot 35.1 percent from the field in 12 games with the G-League Ignite last season, which doesn't exactly scream "can't miss scorer" at an even higher level of basketball.

His case to get drafted in the first round rests on his high school resume and the brief flashes of talent in the G-League, the major excuse being that he was competing against grown men and not other teenagers last season. And toward the end of the season, scouts saw improvement from the touted prospect, flashes that reminded them of why he was well-regarded to begin with. He has the length to overcome so-so height, generates shots at the rim regularly, and his handle is a legitimate asset, one he uses to get where he wants on the floor and when. With NBA spacing, guys like that often figure the rest out.

The optimist's case for Hardy is that refining his decision-making would allow him to take advantage of a solid frame, good ball-handling, and the shotmaking ability that is probably better than he showed with the Ignite. In a smaller role, which he would certainly have playing off of Embiid, Harden, and Maxey in Philly, Hardy's warts may not show up as much. The problem with the optimist's case is that it rests on Hardy becoming a player you want him to be rather than him continuing to be who he is.

The rundown: A 3-and-D wing flier they might take a look at if they pick up a second-round pick in a trade down or alternative trade scenario.

The rundown: The former Hawks standout has some potential as a pull-up threat and is an excellent playmaker at his size, but concerns about his athleticism and shaky handle will put him on the fringes of this class, a guy who may need to impress at Summer League/stick as an undrafted free agent in order to get on an NBA roster.