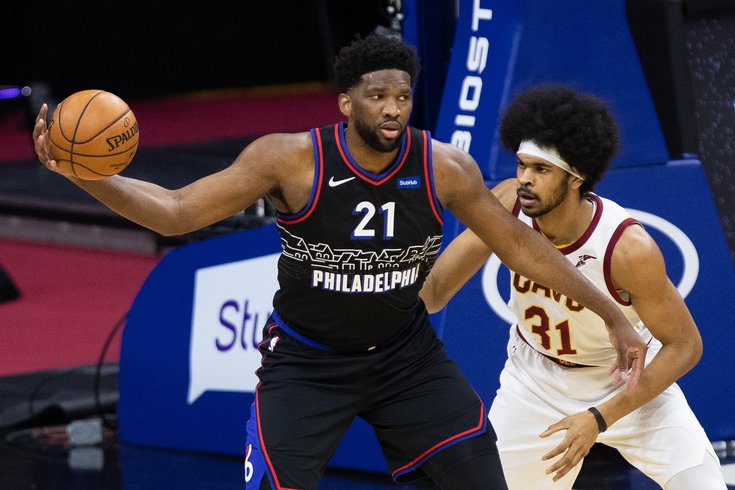 The Sixers were flat for long stretches of Saturday's game against the Cavs, and a young group from Cleveland made them pay for it in a 112-109 overtime loss for Philadelphia.

• When he was still with the Brooklyn Nets, Jarrett Allen combined with the rest of his old team to force the Sixers (and specifically Joel Embiid) into one of their worst nights of the year. It was a bit of a different story for Embiid against Cleveland on Saturday — Allen and backup center JaVale McGee had picked up six fouls by halftime, with Embiid absolutely brutalizing the Cavs in the post.

He needed to because the Sixers lacked consistent offense outside of the big guy for most of the game. Though he was a culprit in some of their defensive struggles, Embiid was one of the few guys who appeared to be consistently engaged against Cleveland, cycling out of post-ups and right into pick-and-rolls to try to keep things humming when possessions bogged down.

(I'll have to go back and pull the footage after the game, but Embiid had one of his better rolls to the rim in a while on a set with Shake Milton in the first half, partially because he set a great screen to get Milton around the corner in the first place. I continue to think he can grow a lot as a pick-and-roll threat even if it's not his favorite thing to do.)

It feels like we see something new from Embiid every other game, and Saturday's edition featured this stepback jumper out of a crossover that a man his size simply should not be able to execute:

Embiid was also one of the guys (perhaps the guy) who changed the tone on defense in the second half. It's not often you see the biggest man on the floor sparking better transition defense, but on top of his rim protection, Embiid made the effort to get back and play free safety with the Cavs pushing the pace, an example other guys can't help but follow.

• There have been some weird offensive moments for Mike Scott since he returned from injury — it feels like he's a bit more reluctant to let jumpers fly than I can remember him being — but I think he deserves a good bit of credit for his improvement on defense. He has been more engaged there recently than at any other point during his Sixers tenure, and that helps him contribute to winning stretches even when he's not offering much on offense.

That was the case in the early part of the third quarter, when Scott took Furkan Korkmaz's starting spot in the rotation and gave the Sixers a bit of extra size. Nobody would mistake him for Matisse Thybulle, but using good positioning and strong communication with his teammates, Scott helped the Sixers bunker down.

• No issues with Doc Rivers' ATO call on Joel Embiid's shot that missed at the end of regulation. Got the ball in the hands of their best player and guaranteed the last shot of the game for Philly. Oh well.

• It's not often you're going to hear me say this, but the Sixers' offense played too heavily through Ben Simmons on Saturday night. I promise that's not a criticism of him — we'll get to him individually in a second — but it felt like a missed opportunity after we saw Embiid bait the Cavs into foul after foul in the first half.

While Embiid tends to be more dominant in first halves, this was a good opportunity to get him posted up against multiple big men in foul trouble, who would have been forced to either let him go by for easy baskets or take more fouls, compounding the existing problem. He fumbled some winnable situations with smaller players on him, admittedly, but even those came in later-clock situations and mostly by accident.

• On the positive side with Simmons, 20+ point games have felt closer to a standard night than an outlier lately, even when he hasn't actually hit that threshold. He is forcing the Sixers to play through him and finding intelligent ways to get involved without completely abandoning their gameplan.

A small thing that has changed from past years — he has figured out how to aid their attack of zone defenses, exploding to the middle of the floor to either get to the rim or hit the shooter that has gotten open because of the pressure he created with the cut.

Simmons' decision-making was bad enough to outweigh all of that. He had a handful of putrid turnovers against the Cavs on the jump passes we've seen far less frequently lately, and his defensive thought process was jumbled all night, with Simmons taking bad positions and angles on a fair amount of critical possessions.

You're not going to win many games where your primary ballhandler has seven turnovers. You're not going to overcome overtime deficits when he is taking out-of-bounds fouls to give back points for free, either. At least this brand of bad game is one you can mostly shrug off for Simmons.

• Those first two blurbs are not really the headline issues for the game, however. A slow start was entirely predictable for the Sixers on Saturday night. Fresh off of a national TV victory over Luka Doncic and the Mavs, the sputtering and shorthanded Cavs are not exactly getting the juices flowing.

Those are the excuses we would trot out for last year's team. This one has done a better job of taking most opponents seriously, so it's a bit more jarring when they sleepwalk through a quarter or two. The head coach was one of the first people to notice — he bellowed "WAKE UP, LET'S GO!" early in the second quarter unhappy with what he was seeing.

Transition defense (and the missed shots/turnovers that forced them to play it) was the biggest issue for Philly early in the game, with the Cavs running up 15 fastbreak points on the Sixers before the second quarter was halfway over. They got caught on a couple of leakouts, but mostly they either got outrun or had turnovers that were so ghastly that they never gave themselves a chance to contest layups in transition. Effort was a problem elsewhere — Isaac Okoro outbattled several different Sixers for offensive rebounds and made them look stupid and slow in the process.

The Sixers had to learn the hard way what happens when you screw around for too long against a young team who came in trying to prove something. All due respect to the Cavs, who have some nice young players, there's no way the Sixers should have been locked in an overtime battle with this team.

• Tobias Harris is a pretty durable player so they've rarely had to see how the team looks without him over the last few years, but they struggled to cope with his absence on Saturday even with their top two guys healthy.

Harris has not exactly carried bench units to respectability, but his ability to score in a variety of different ways has helped to keep them afloat as he toggles back and forth between mid-post attacking, drives, and catch-and-shoot threes he has hit at a high clip. When you're sticking Mike Scott in his place with that bench group, you're just not getting anywhere close to the same utility (to say nothing of the gap in talent/skill).

They could have made up for Harris' absence to some extent by simply making their open shots. It was a bad night on that front for just about every guy they trust to make threes — Seth Curry was inconceivably bad, and Furkan Korkmaz was bad enough to get demoted from temporary starting duty mid-game, if that gives you an idea.

The Sixers are a top-heavy team, and they looked like a top-heavy team often does when missing one of their best players. That said, Embiid and Simmons should be more than enough to blow the doors off of a team like Cleveland.

• Perhaps Doc Rivers has asked him to play with more of a conscience beyond the arc, but Mike Scott seems more reluctant to let shots fly than I can ever remember him being in his NBA career. There was a play in the first half where he dribbled out of what looked to be a wide-open three in the corner in transition, resetting the offense for no reason and passing up the shot that puts him on the floor in the first place.

Scott has actually shown improvement in a couple of ways recently, from defense to off-ball movement, so maybe it's just an aberration. Just a strange development.

• I have to mention transition defense a second time, because good grief, there is no excuse to let a team run on you like Cleveland did on Saturday night. It's even worse when you consider that the Cavs had six players scratched for the game, giving their opponent incentive to save their legs and hold a bit of energy back for the second half. Think again.

• Seth Curry is going to want this one back. Ice cold from deep, defense veered between dumpster fire and minor car accident bad, and sometimes you're just going to have nights like these during a long season.

On the other hand, there's a great case Rivers should have simply removed him from the game in crunch time like he has any number of role players this season. I get that his spacing is valuable at all times, but the Sixers actively ran plays for him deep into crunch time in spite of how awful he was. There's no shame in a bad night, but there's plenty of shame in not being able to recognize one is happening.

• The Sixers had a massive advantage at the free-throw line and left far too many points on the table. Not much more to say on that one.

• This loss drops the Sixers to a dead heat with the Brooklyn Nets, and pending the result of their game with Dallas currently being played on national TV, the Nets could be the undisputed No. 1 in the East by the time the clock strikes midnight in Philly. There is not going to be much margin for error if they want the No. 1 seed, and losses like this are extra painful as a result.