The "City of Brotherly Love" design popped up again, this time with a full court design 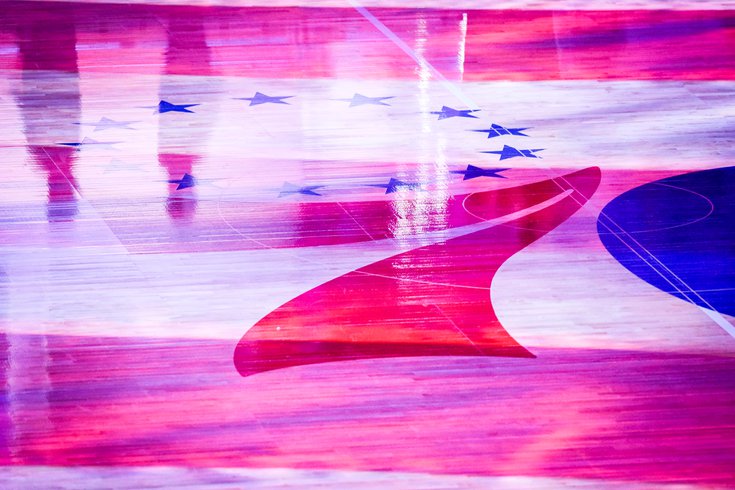 Arena shot during the Sixers game at Wells Fargo Center on January 4, 2021 in Philadelphia, Pennsylvania.

That "City of Brotherly Love" Sixers uniform leaked again on Friday, this time with a full court design by way of Barstool Philly.

Believed to be the "City Edition" jersey for the 2022-23 season, this design – along with ones for most of the league's other teams – has been popping up since February, but Friday's leak has been our best look at the kit so far and is likely a further along, if not final, iteration of it.

As you can see above, the jersey puts "City of Brotherly Love" across the chest rather than any of the "Sixers," "Phila" or "Philadelphia" designations the team has been working with the past few years. And the jersey and shorts have red stripes running down the side with the bicentennial "76" placed on the front of the left leg and the 13 stars on the waist.

If this is one of the official alternates the Sixers will be running with, we'll likely get the full explanation on the design and how it connects back to the city or the team's history at some point in the next few weeks as things really start building toward the new season.

For now, based on recent history and similarities, the closest this design comes to seems to be the 1970s "Seventy Sixers" throwbacks the team wore during the 2019-20 season, but it's definitely not 1:1.

Each of the 30 NBA teams have a minimum of four uniforms designed by Nike every season, with the "City Edition" ones usually used as alternates that are refreshed annually.  They've grown pretty hit or miss across the league as a result, and we'll have to wait to see if this possible Sixers jersey does end up striking a chord with fans.

If this is the new "City" jersey though, it'll be following up an incredibly tough act in the extremely popular Spectrum-themed uniforms from last season. Fans will also give it flack because it isn't the Iverson-era black and gold look they've been begging for the team to bring back for years now.

The Sixers' will begin their preseason slate on October 3 at Brooklyn and their regular season on October 18 at Boston. We should know their uniform rotation for the year before then.