Sixers fan who flipped off Westbrook: I did it because he called me fat

The local doctor and part-time comedian also issued an apology 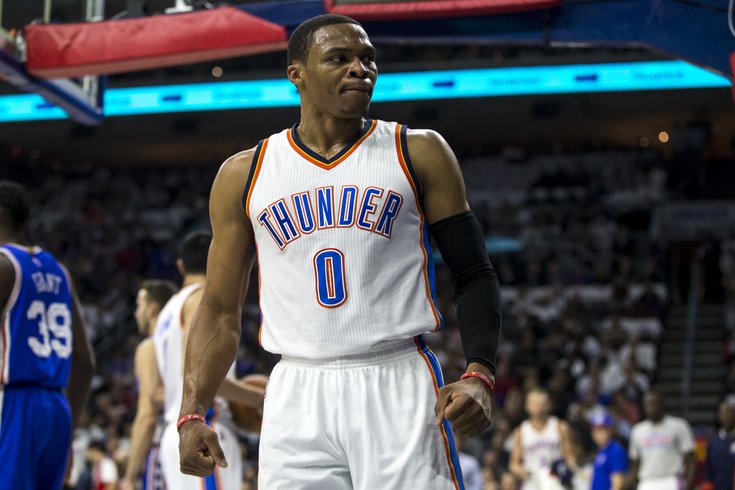 Thunder guard Russell Westbrook had an interesting start to his 2016-17 season.

UPDATE [6:11 p.m.] - Harkaway offered the following statement of apology on Thursday evening, according to philly.com's Jonathan Tannenwald. Here's what the doctor-slash-comedian had to say:

"As a part-time comedian I realize that my words and actions are sometimes inappropriate," Harkaway said in a statement to Philly.com issued by a personal representative. "In this instance, after standing up to boo and being provoked by Russell Westbrook calling attention to my being overweight, my action in response was clearly inexcusable and I am embarrassed.  I sincerely apologize to my fellow Sixers fans, the Sixers organization, my colleagues and patients, and to Mr. Westbrook for my behavior."

Say what you will about the scene at the Wells Fargo Center a night earlier, but Patch Adams has handled this about as well as can be expected.

The Philadelphia 76ers fan who became instantly (in)famous after he was caught on camera flipping double middle fingers to Russell Westbrook during Wednesday night's season opener at the Wells Fargo Center says he was provoked by the Oklahoma City Thunder guard.

According to the New York Post, before the fan's obscene gesture, Westbrook called him fat, prompting him to uncage the birds.

Dr. Richard Harkaway, a Philadelphia urologist who is originally from Long Island, wrote that it was Westbrook who initiated the confrontation, which ended with Harkaway being tossed from the Wells Fargo Center in Philadelphia during the 76ers’ season-opening loss.

“To all my FB friends who are seeing a picture of me on the Internet giving the finger to Russell Westbrook. Actually two fingers,’’ Harkaway wrote in a private post. “Not as simple as it seems. I love to scream at the players and anyone who has been to a game with me knows this. Part of my charm. What you may not have seen on any of the video clips is what started the whole thing, which was Russell Westbrook saying ‘sit down f—ing fat boy’ when I stood up to boo.”  [nypost.com]

While watching the game on TV, it was clear that Westbrook was yelling something in Harkaway's general direction, but what exactly was said remains unclear.

Westbrook went on to score 32 points as the Thunder topped the Sixers, 103-97.

“I know, that’s crazy, right?” he said when asked about the incident postgame. “I turned a new leaf, though. I leave that alone, because that cost me $25,000 last time. The fan, he’ll be alright. They can say whatever they want to the players and do what they want, but my job is to play basketball, and that’s what I do.”

Harkaway, who was ejected from the game -- you better believe those seats weren't cheap -- following the first-quarter interaction with Westbrook, got a pretty raw deal. Should he have done that? Probably not. But does it warrant missing the entire rest of the game? No way -- as long as he isn't a drunk buffoon whose behavior will only escalate -- and that didn't seem like what we were watching.

“I am sometimes sensitive about my plumpness,’’ Harkaway added. "I guess I got a little out of hand.”

To be more specific, he got two middle fingers out of hand. Maybe next time, just try to keep those tucked in.