The Sixers asked Ben Simmons to do everything to beat L.A., and he delivered 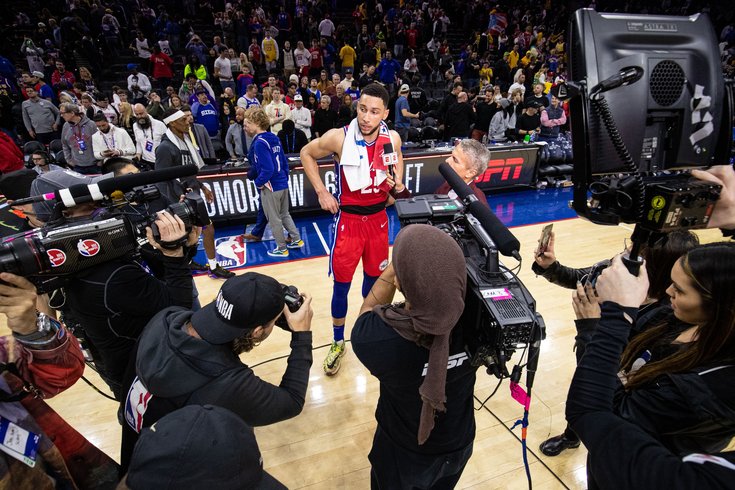 Anyone who has followed this Sixers team closely this season will sit back and think to themselves, "Of course they won this game." On national television, against the league's most popular team and most recognizable player, of course they would show up, show out, and leave a lasting impression for the public to hang onto in tough times.

How they got there, how they beat the West-leading Lakers, how they managed to do it without two starters, that's the part that matters. Ben Simmons is many things, and on Saturday night, his gifts were on display rather than the flaws that dominate the discussion surrounding his game.

"He was so, so good, and good at multiple positions again," head coach Brett Brown said after the game. "You saw what we did with him playing the five, at the end of the game they actually came up and started guarding him, so I put him in a bunch of pick-and-rolls as the point guard, put him in a lot of elbow action offensively. And then defensively, you look at the disturbance Matisse and Ben caused, what did they have, nine cumulative turnovers? He was really special tonight on a very talented court."

In the recent stretch without Joel Embiid, the shifts Simmons has made from moment-to-moment, quarter-to-quarter are nothing short of remarkable. First unveiled as a small-ball center against the Brooklyn Nets, the Sixers went back to him there yet again against the Lakers, who were down one big man without center JaVale McGee. He was not exactly dealing with pushovers there — if Dwight Howard wasn't in the game, it was Anthony Davis or LeBron James at center. You may recognize their names.

It did not especially matter.  41 minutes and 14 seconds of action later, leading both teams in minutes as he has so often this season, it was Simmons who had the last laugh. Other than that whole losing a tooth in the middle of the game thing, anyway, which (rightfully) forced him to miss his postgame media duties to get his mouth checked out.

Brown moved Simmons all across the chessboard, wielding him as if he was the most powerful piece in the gym. There may be something to that. Offensively, the Sixers had a lot of success early on at running the aforementioned elbow sets, with L.A. too focused on chasing Philly's guards to pay attention to Simmons' attempts to score. By the time someone like Kyle Kuzma had braced for impact, Simmons had already gone through him for a bucket.

When Sixers fans and observers have tried to make the case for Simmons as an All-Star against other talented players in the Eastern Conference, the first place they turn to is on the defensive end. It is not without merit — Simmons has been one of the best and most versatile defenders in the league this season, a first-team All-Defense candidate who may play his way into the Defensive Player of the Year conversation.

But if you ask teammates what stands out about his Saturday night against the Lakers, the wily veteran who made his reputation as a defensive wizard immediately pointed to the other end of the floor.

"Offensive end, his will and his ability to get to the basket, getting other people involved, [he] played a great game," Al Horford said after the game. "It was awesome, at times I was out there just watching him figuring things out, whether it's laying it up, making the pass, it's amazing. He's coming down the lane and it's just like good luck...when he's playing at that level, it fuels the rest of us, and tonight he did it again on a huge stage."

Naturally, there will be questions that grow out of this performance and Simmons' recent run about how different it would look with Embiid on the floor. I would opine that Simmons' success had as much to do with how the Lakers decided to cover him as it did with how the Sixers lined up and spread the floor for Simmons.

If you're going to have Danny Green playing tight coverage on Simmons out to the three-point line, they will be turned into roadkill. Rather than trying to defend Simmons with a big man, as other teams have done in the past, or sagging off of him, as even the Lakers have done in the past, they made it as easy as possible for Simmons to leverage his physical gifts.

Not every defense will be so kind to him, handing him matchups he can exploit with ease. But even when he isn't dropping 28 points on national television, he is and can be one of the most impactful players in the league because of his defense.

It is an oversimplification to chalk up defensive success to effort. Tools and intellect matter a great deal, and if all it took to be a great defender was to try hard, there would be scrappers from around the world in NBA rotations.

But Simmons' effort level is what has transformed him from a good, if inconsistent defender into a great one. For most of 48 minutes, you can bet on getting his best, with Simmons leaning into bullies like James and smothering smaller players until they run out of oxygen. In between those one-on-one battles, there are individual efforts from Simmons that erase misses and mistakes from the collective.

That play, like many of the plays Simmons has made as a defender this season, are about effort and will to win. It is an area the team has lagged in at times in the past, and even within this season. But in a league where motivation ebbs and flows as method to get through an 82-game slog, his effort has been as consistent as anyone.

His admirers following Saturday's include none other than James, the man who has been a mentor to Simmons and the ghost the rest of the league has been chasing for damn near 15 years. On a night where James passed Kobe Bryant for third on the all-time scoring list, on a night where the focus could have been turned on his own terrific individual achievement, James took a question about Bryant looking on from the sidelines and opined he might be looking on as Simmons takes over the league one day.

"It’s pretty amazing," James said of Bryant turning into an observer rather than a competitor, "that’s pretty much how I’m going to be when I’m done playing. Being able to come back and watch this beautiful game, hopefully there’s somebody playing the game at a high level. Like that guy across the hallway, Ben Simmons, I can sit and watch him and see how much he continues to grow, watch him and see him continue to do what he do, because he’s growing every day.

Those same people who felt this big performance coming, who prepared for a big win over the Lakers? They're just as aware that a faceplant for Simmons and his teammates could come shortly. Nothing gold can stay, in Robert Frost's poems or 76ers basketball games.

But with Simmons growing every day, flexing his influence in ways few in the league can, big dreams for his potential are still possible. It is only with this Simmons that the Sixers can be who they've believed they can be all along.