Snow forecasted in Philly this Super Bowl Sunday, 4 to 7 inches

Snow accumulation is predicted to be much lower than last Sunday's storm, 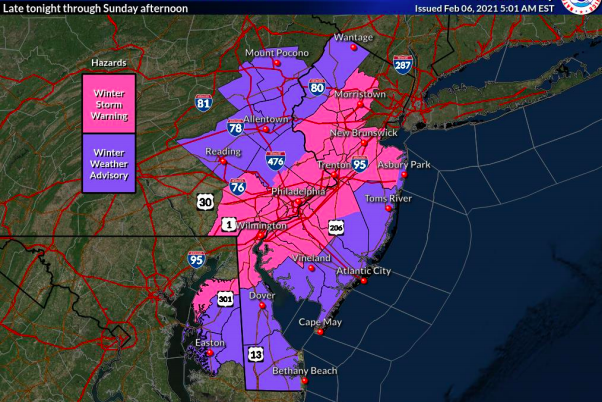 The National Weather Service issued a winter storm warning Saturday morning for the Philadelphia region. Some areas could see as much as 4 to 8 inches of snow.

After a snow storm dumped 14 inches of snow in the Philadelphia area earlier this week, another storm is making its way through the region.

The National Weather Service issued a winter storm warning Saturday morning for a coastal storm that could bring 4 to 7 inches of snow this Super Bowl Sunday.

Accumulation is predicted to be much lower than last Sunday's storm, and snow is forecasted to start falling Saturday night and into Sunday morning. The flurries should stop in time for the Super Bowl, which starts at 6:30 p.m.

Saturday should stay sunny and in the low 40s before the coastal storm makes its way through the area.

Central and southern Delaware, South Jersey and the shore will get hit with snow first as the storm moves through the area as early as 1 - 3 a.m Sunday morning.

Precipitation will continue north and cover all of South Jersey, Philadelphia and the surrounding suburbs before sunrise.

Winter storm warnings and winter weather advisories are now in effect for the region on Sunday. You can find the latest briefing here: https://t.co/JiD09BPJVv pic.twitter.com/OTW84okOvL

Several inches of accumulation are possible, but it's not expected to last very long.

Here's a look at the NWS forecast for Philadelphia going into next week.

SATURDAY: Mostly sunny with a high near 43 degrees. Snow is possible after 3 a.m., with a 40% chance of precipitation.

SUNDAY: Snow before 4 p.m. is expected with the chance for precipitation at 100%. New snow accumulation is forecasted to be around 3 to 7 inches.

MONDAY: Sunny weather with a high near 29 degrees.

TUESDAY: There's a chance of snow Tuesday morning, before 11 a.m. and noon. It will turn to rain for the rest of the day, with temperatures forecasted around 40 degrees.

WEDNESDAY: Partly sunny with a high near 32 degrees.