The Style and the Fury: An interview with Philly MC Reef The Lost Cauze 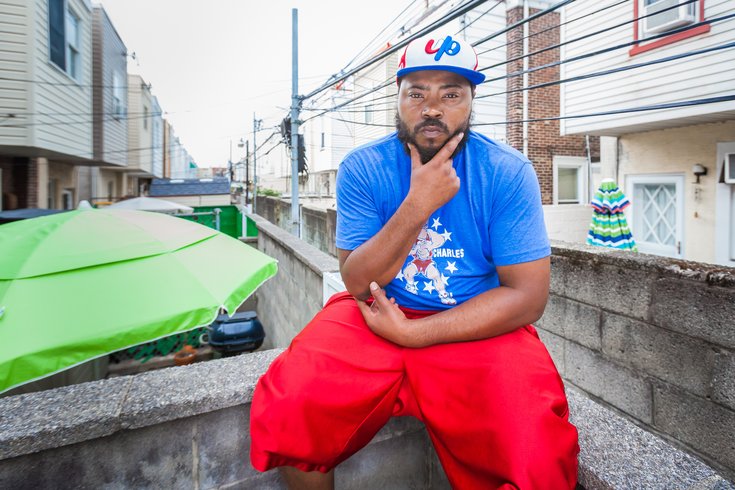 Hip hop artist, Reef The Lost Cauze, in the backyard of his South Philadelphia home.

“Radio … It’s the wackest, man,” laments Philly MC Reef The Lost Cauze on his new record, “Furious Styles.” “How they don’t play me in Philly when I’m packing stands in Pakistan?”

The man’s got a point.

He was born in West Philly, lives in South Philly and has been a fixture in the city’s hip-hop scene since the late ‘90s, establishing a reputation for passion, aggressive delivery and hardcore lyricism. His music has sent him touring the underground rap circuit and earned him the respect of his peers and fans across the world.

“Furious Styles,” a collaborative project with Philly DJ Bear One, takes its name — and cover image — from the tough but compassionate father played by Laurence Fishburne in John Singleton’s classic 1991 coming of age film “Boyz In The Hood.”

The record opens with a sample from the movie: Furious delivering a thoughtful speech to a group of young men in his community, urging them to learn to resolve their issues peacefully. “You have to think, young brother, about your future.”

On the song “Radio Suckas,” you talk about how you occupy this unique space: You’ve been around for a long time, you’re well respected, but even your city’s late-night mix shows that almost exclusively play local street rap don’t seem to be playing your music.

Yeah, I’ve always kind of been an outsider in the city. That could be for a many number of reasons, I’m sure my disdain for politics and authority play a role in that. But I learned early on that you don’t need that look to succeed. Most of my peers travel the globe with autonomy. Would I enjoy more support in that area? Sure. But I’ll never go out of my way to try to make it happen. I think most of those guys are slimeballs, honestly.

That’s an odd dynamic that I’m sure plays itself out in other major cities and their hip-hop scenes as well. A local artist like yourself, with a global following, and the city’s radio outlets couldn’t be bothered.

Yeah man, it’s always a mindf---. I made it very clear early in my career that I couldn’t stand a lot of the powers that be and it may have cost me certain relationships, but [there’s] just so much fake shit going on it’s hard to stomach. I commend people who can play the game, though. But again, it isn’t something myself and the MCs I associate with are concerned with. The most successful rapper in my clique from Philly is Vinnie Paz and they never played him once, either. We laugh about it before rocking a sold out festival in Europe.

“The most successful rapper in my clique from Philly is Vinnie Paz and they never played him once, either. We laugh about it before rocking a sold out festival in Europe.”

How do you feel you fit into Philly’s overall hip-hop landscape? You’ve been in the game a long time and you’ve earned a lot of respect amongst fans and your peers. Where are you in relation to that? Is that even a thing that you think about?

I think about it all the time. And I honestly don’t know. It’s definitely something I struggled with when I was younger. It was always “I’m not street enough for the hood, not conscious enough for the Okayplayer-type crowd,” and often I felt resentful about being kind of placed in the backpacker lane. Because if you listen to my music it’s far from that, and it doesn’t have any type of lane I’ve always just made what I feel. And if I were to perform or get on a track with anyone, no matter what “sound” they rep, I’ll hold my own. I do feel the younger generation has done away with those walls. You can just do you now. Coming up in my era you were branded with a sound and that’s where you stayed.

Yeah, what you said about the younger generation doing away with those sub-genre boundaries makes sense. I still see older rap fans (mostly online) still trying to uphold that old “Mainstream Vs. Underground/Backpack” dichotomy and the young rap fans are just like: Whatever, I like listening to Kendrick and 2 Chainz ****and some random kid that I just found on Bandcamp.

Exactly! And I’ve always been on that. It’s all there if you go through my catalog. I never said, “oh I can’t make that song it’s not in my wheelhouse.” I’ve had fans curse me out because they expect me to just be one thing at all times.

[Laughs] It’s definitely annoying. But one thing I learned early is that for every one person who will dismiss you for trying new sounds there will be two or three new people who will f--- with it. If you deny yourself all this dope ass music people are making because it doesn’t fit your idea of what hip-hop should be, that’s your loss. I’m the guy that will listen to anything if I think it’s dope and I try to make music the same way.

“If you deny yourself all this dope ass music people are making because it doesn’t fit your idea of what hip-hop should be, that’s your loss.”

Word. I also wanted to talk with you about how you’ve navigated working as an independent artist all of these years. Clearly, the major label system has been in crisis for years but that also influences the smaller acts, labels and distributors. The internet helped suck a lot of air out of the major label’s dominance but it also opened up resources for the indies. Do you find that it’s easier or more difficult to make a living creating music right now?

I think it’s difficult making a living off of art no matter what system you’re in. Major or Indie. Think of how many artists have come and gone on a major, they have hit records money, and fame, and poof it’s gone if the next record flops. On the other hand, you can lose your mind trying to do it alone because you have to wear a hundred hats. As we talk right now I’m stressed the f--- out because the new album is about to drop so I’m running around like a rabid dog trying to get everything in order. I honestly can’t say one method is better than the other, it just depends on the team and the people you are dealing with. I will say being indie forces you to learn the game more so you may be better prepared for harder times as opposed to someone who’s had everything taken care of for them. But either way, this shit is a headache man [laughs]. Also, the product we are trying to sell is basically free now. How the hell you deal with that? I’m finding myself as I get older, and want more from life and for my family, looking at other ways to eat. Because this here can be a really frustrating way of life. 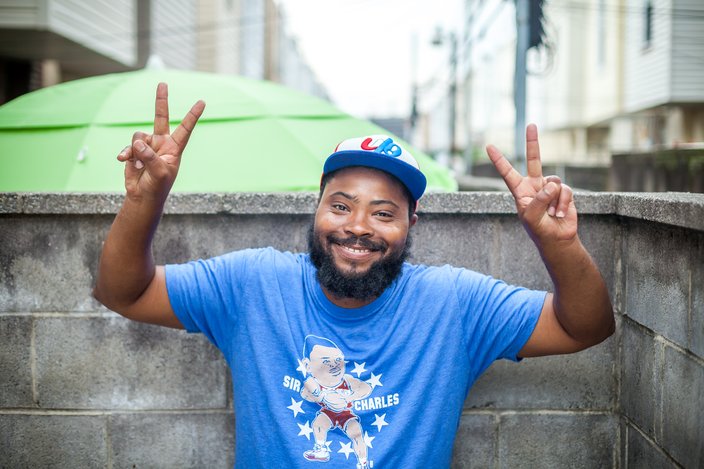 Hip hop artist, Reef The Lost Cauze, in the backyard of his South Philadelphia home.

That’s real. What keeps you going at this point? Passion? Habit?

Fear [laughs.] I don’t know anything else. So much of my life and livelihood and identity is that of an artist. I don’t know what comes next. It is truly all I have to make me feel like I’m not just a normal square. I can definitely say passion and all that is a factor but if I’m being totally honest, this is all I know man.

Damn. I often wonder about why people create, like what starts them off. You say that being an artist makes up a big part of your identity. As a kid, I started writing rhymes almost immediately after my father was killed, and it took me a long time to realize that I had taken up music and art at that time because I was searching for peace and trying to heal. Was identity something that you were looking for when you started?

Sorry for your loss, man. For me, it was definitely about finding my place in the world. I always wrote rhymes as far back as age 6 or 7. Writing and acting, performing, in general, was just something that always came natural for me. And when you see people react and you feel that rush it’s like “oh, okay, this is me right here.” I could hoop a little, but I wasn’t an athlete. I was street smart, but I wasn’t a hustler. This was the thing that made me. The thing that made a people look at me and give me respect. So I think while I definitely have always had a love and respect for the art, the attention and respect that came with it is probably what really motivated me to go at it as hard as I did.

Thank you, man. I’d also like to talk a little bit about your new project. Is it a collaboration with Bear One?

Yeah, my last few projects have been just one producer. It’s just been a much easier way of working for me and gives way to a more cohesive sound. Bear is an old friend, and we have been working together off and on for years. We finally just said let’s give something to the people. It’s a very street record, probably the most street record I’ve ever done but as with all my projects, it’s just a reflection of where I was at the time. I needed to get some rage out.

Yeah definitely, it’s also an homage to that style of brother. I am Furious Styles man [laughs]. The wise old brother that will drop jewels but still tear your head off. So it just fit.

What was the process/workflow like making the record? Did Bear One send you completed music to write to, did you link up in the studio to work on songs?

He’s always been one of my favorite characters because my uncles and O.G.s all remind me of him. He sent beats and I wrote to them, came to his studio and knocked them out. …

I hate the studio bro. That’s when it feels like work to me, so I come ready, rehearsed and get right down to it. Ain’t a whole bunch of dudes with me taking up space. And a few of those tracks were recorded years ago, we just spruced them up, changes here and there.

So the record comes out July 1. Are you hitting the road with it? I know you have a family so the touring thing may be a challenge.

Yeah, I’ll be doing a run in August in the states and a run in Europe in September.

It’s routine at this point [laughs]. I don’t even be wanting to go.

I’ve actually never done it. So I’m old as hell making this record and hype about playing in places outside the city.

You’ll have a blast I’m sure, man. Never too old for any of it.

Any last words or thoughts?

Thank you for your time and shout out to everyone who’s been with me on this journey. “Furious Styles” out July first.