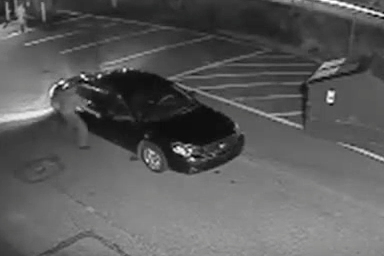 The suspects who allegedly burglarized two Fishtown businesses were caught on camera getting into this vehicle.

Police are searching for two suspects wanted for a pair of late-night burglaries in Fishtown last month.

According to authorities, the two males forced their way into Jae's Jewelers located at 2433 Aramingo Ave. just after midnight on Sept. 12.

After getting inside through the back door, they allegedly stole $5000 worth of jewelry and fled.

A few minutes later, the two suspects broke into the National Guard Recruiting Center just down the street and nabbed a 50-inch television and an Xbox 360, police say.

They were then seen entering a four-door vehicle that drove off in an unknown direction.

Their activities were caught on surveillance cameras. Watch the video of the suspects here:

The male suspects are described as white, with one wearing a gray hooded sweatshirt and the other having a bald head.

If you see the suspects, police are asking that you do not approach them and call 911 instead. Anyone with information on the suspects can submit a tip by calling 215-686-8477 or texting a tip to 773847.