A woman from Richmond, Virginia won't be able to vote in the 2016 Presidential Election, but she found a unique way to have her voice heard.

Mary Anne Noland passed away on Sunday at the age of 68. However, according to her obituary published on Monday in the Richmond Times-Dispatch:

"Faced with the prospect of voting for either Donald Trump or Hillary Clinton, Mary Anne Noland of Richmond chose, instead, to pass into the eternal love of God." 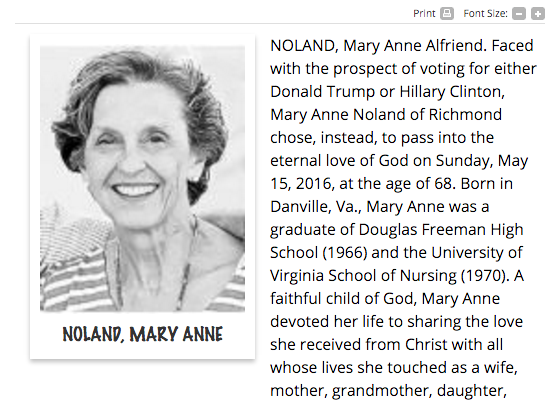 Noland's husband, Jim, told NBC12 in Richmond that the obituary "was a joke and way for Mary Anne's children to carry on her sense of humor."