Terrell Owens, 48, wants Buccaneers to sign him for playoff run 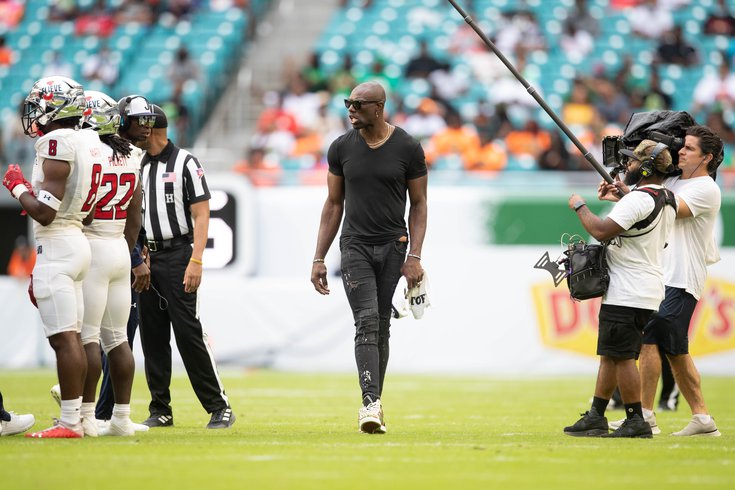 Terrell Owens is pushing 50 years old, but the Hall of Fame wide receiver believes he could replace Antonio Brown for the Tampa Bay Buccaneers' playoff run. Owens is pictured above on the field during the Orange Blossom Classic between Florida A&M University and Jackson State University at Hard Rock Stadium in Miami Gardens, Fla. on Sunday, Sept. 5, 2021.

The Tampa Bay Buccaneers are a banged-up team at the skill positions on offense, having lost wide receiver Chris Godwin and running back Leonard Fournette for the year, while Antonio Brown went nuclear on Sunday and effectively quit the team.

The defending Super Bowl champions are 12-4, but they had to rely on Tom Brady heroics to pull out a victory over the lowly New York Jets. There's no question the Bucs are an excellent team, yet they are undoubtedly vulnerable heading into the postseason, and it's a steep climb to repeat in the NFL.

After Brown tore his uniform off and left MetLife Stadium on Sunday, former Philadelphia Eagle Terrell Owens jumped on Twitter and insinuated that he should be picked up by the Bucs. The social media team at SportsRadio WIP replied with laughter, but Owens wasn't joking.

Now 48 years old, Owens has insisted since his retirement that he's still in peak physical shape and more than capable of competing in the NFL. The Seahawks gave him a tryout in 2012, when he was 38, but he didn't make the team. Owens has since been inducted into the Pro Football Hall of Fame.

Any suggestion of Owens making an NFL return is usually met with ridicule, in part because Owens has a history of disruptive locker room behavior that most teams wouldn't want to risk on top of the number one issue — his age.

But Tampa Bay is led by 44-year-old Tom Brady. The age argument is a little bit hollow when it comes to freak athletes, even if quarterbacks and wide receivers have much different athletic requirements.

Two years ago, Owens challenged Chiefs wide receiver Tyreek Hill to a 40-yard-dash and still clocked in at about 4.40, compared to Hill's 4.37. Owens also recently posted a video on Instagram showing off his route-running skills. (Granted, he's not facing Darrelle Revis here).

On Sunday night, Owens appeared on his weekly FUBO Sports Network show, "Getcha Popcorn Ready with T.O. and Hatch," where he said he's confident he could have a positive impact in a limited comeback.

"If you think about where they are in the season, they don't need me for a 16-game season," Owens said. "Three to four games at the max. So, yes, I feel like I can go in, I can contribute at a high level and can be productive."

The Eagles, who clinched a playoff berth over the weekend, are likely to play Tampa Bay in the first round in most scenarios based on different week 18 outcomes.

It's highly doubtful that the Bucs even consider bringing Owens in, since they still have Mike Evans and their backups are better than some of the starting wideouts Brady had to play with in New England.

But how bizarre would it be for the Eagles to face old man Owens in a playoff game with Tom Brady throwing to him and Darius Slay or Steve Nelson defending him?

If anyone could make it happen, it would be Tom Brady, who saw Owens thrive with a busted ankle in Super Bowl XXXIX.

Regardless, the probability that the Eagles will face the defending champs in the playoffs is intriguing. It would be one of the best doses of playoff experience this team and coaching staff could hope for in a year they exceeded everyone's expectations.