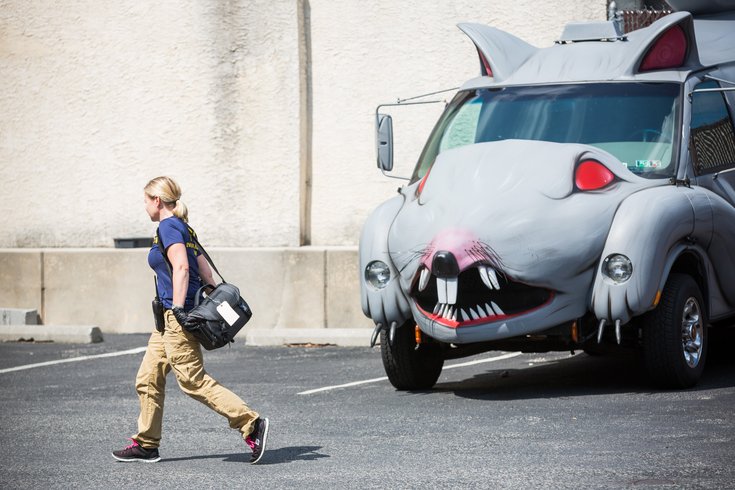 An FBI agent walks through the parking lot of the IBEW Local 98 union offices at 1701 Spring Garden St. on Friday, Aug. 5, 2016. Behind her is the 'rat mobile' involved in many protests.

Philly has long been known as a union town, which means that inflatable rats are often part of the civic streetscape.

Yes, we’re talking about those huge inflatables that often accompany union protesters at non-union sites. Heck, one local union even has a gray “rat mobile” to roll out at some of these protests.

But one federal agency – the National Labor Relations Board – could be looking to deflate those huge rats in perpetuity, at least according to a story last week in the National Law Review.

That report cites a May 14 “advice memorandum” suggesting that “Scabby the Rat,” “Corporate Fat Cat” and like-intentioned inflatables may represent “illegal secondary picketing."

Those words didn’t come in response to any of the local protests, but one in Chicago, where the IBEW local’s “Corporate Fat Cat (was) choking a construction worker at a neutral employer’s job site.”

The U.S. Supreme Court has long held that “handbilling” is protected activity – which picketing was not – and when the issue arose during President Barack Obama’s time in office, that protection extended to putting up banners and inflating balloon creatures.

In other words, Robb hopes that federal labor laws are reinterpreted to define inflatables as “unlawful coercion” of businesses.

What’s good for unions and bad for those who can’t stand those inflatable rats is the fact that the Chicago case at issue was informally settled, so the non-binding advice memorandum won’t likely go any further.

Still, the issue arose recently as the NLRB has sought a temporary restraining order against Construction and General Building Laborers’ Local 79, whose members have been protesting at three ShopRite markets in Staten Island, N.Y., according to Bloomberg Law.

In other words, the legal battle over Scabby the Rat's future might just be picking up.