Despite all evidence, president maintains Democrats lost election: 'They cheated,' he said during a virtual appearance 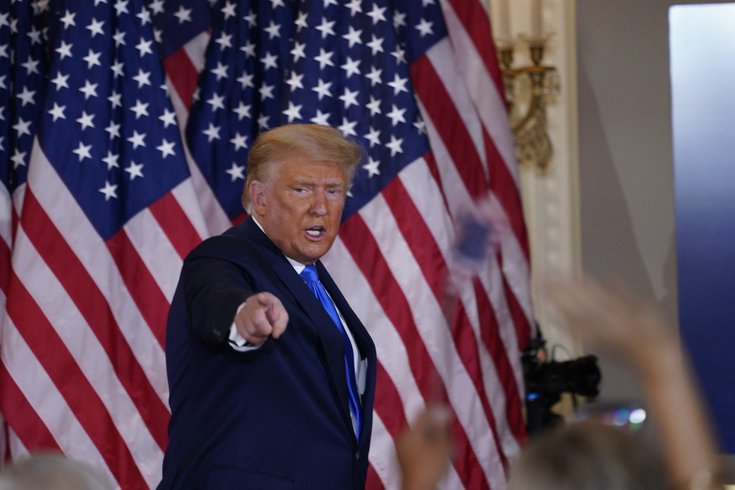 President Donald Trump continued to spread unfounded claims on Wednesday that widespread corruption occurred in the 2020 election. The president gave virtual remarks at a hearing held in Gettysburg by Pennsylvania Senate Republicans.

At one point Wednesday, it appeared Trump would attend the event in-person — which would have his first trip outside the Washington, D.C. region since losing the Nov. 3 election — but those plans were canceled after a campaign staffer tested positive for COVID-19.

Some Republicans in the Pennsylvania legislature have been pushing a last-ditch legal effort to challenge the state law that allowed for all registered voters to use mail-in ballots in 2020 without providing excuses for not going to the polls. The law was passed last year by the Republican-controlled legislature and signed into law by Gov. Tom Wolf, a Democrat.

The Trump campaign's lawsuit in Pennsylvania, which sought to invalidate nearly 7 million mail-in ballots, was shot down by a federal judge last weekend.

Even the Trump administration's Office of General Services has acknowledged Biden's victory in a formal letter, freeing up funding that will allow the transition to the Biden administration to begin.

Biden won the state of Pennsylvania by a margin of 80,000 votes over Donald Trump. No evidence of widespread fraud has been demonstrated.

Despite all of this, Pennsylvania Senate Republicans, led by Sen. Joe Mastriano, held a public hearing at the Wyndham Gettysburg on Wednesday to discuss 2020 election issues and irregularities.

The event was attended by Former New York City mayor Rudy Giuliani, Trump's personal lawyer and the public face of Republican efforts to prove fraud and corruption took place in the 2020 election.

Trump spoke for about 10 minutes, making characteristically false claims about the election and the prevalence of fraud, from illegally cast ballots to obstruction of Republican poll watchers.

"It would be easy for me to say, 'Oh, let's worry about four years from now,'" Trump said. "No, this election was lost by the Democrats. They cheated. It was a fraudulent election. They flooded the market. They defrauded everybody with ballots."

The president further falsely claimed that he won the election "easily" and "by a lot," taking credit for non-existent victories in every swing state in the country.

"Between the voter suppression and all of the horrible things that happened to poll watchers, we have poll watcher affidavits piled up to the ceiling," Trump said.

The president decried the story of an unnamed "elderly woman" who allegedly tried to vote, but was told she had already done so and asked to fill out a provisional ballot, "which goes nowhere," Trump said.

He was apparently referring to a 72-year-old woman in Houston, Texas, where an error had occurred with her registration and the identification she provided. Donald Trump won the state of Texas.

Whether or when the president will concede the election now appears to be almost beside the point with Biden's inauguration less than two months away, and no indication that Trump's challenges stand a chance.

"Elections are a fundamental principle of our democracy – unfortunately, Pennsylvanians have lost faith in the electoral system," Mastriano said. "Over the past few weeks, I have heard from thousands of Pennsylvanians regarding issues experienced at the polls, irregularities with the mail-in voting system and concerns whether their vote was counted."

Whatever those alleged issues and irregularities may be, none have amounted to anything that could change the outcome of Trump being defeated or lead to a federal ruling that corruption took place to alter results. The Trump campaign has filed at least 38 lawsuits since Election Day, NBC News reports, and at least 26 have been tossed out of court or withdrawn by Trump's lawyers.

About 16 of those lawsuits involved Pennsylvania's voting procedures and vote counts. In only one instance can the Trump campaign claim even a small victory: a case in Pennsylvania Commonwealth Court that challenged Secretary of State Kathy Boockvar's extension of a deadline for mail-in voters, missing identification, to provide proof of their identities.

The court said Boockvar did not have the authority to do that, and as a result those ballots were not counted – the ruling affected fewer than 100 ballots, Boockvar's office said.