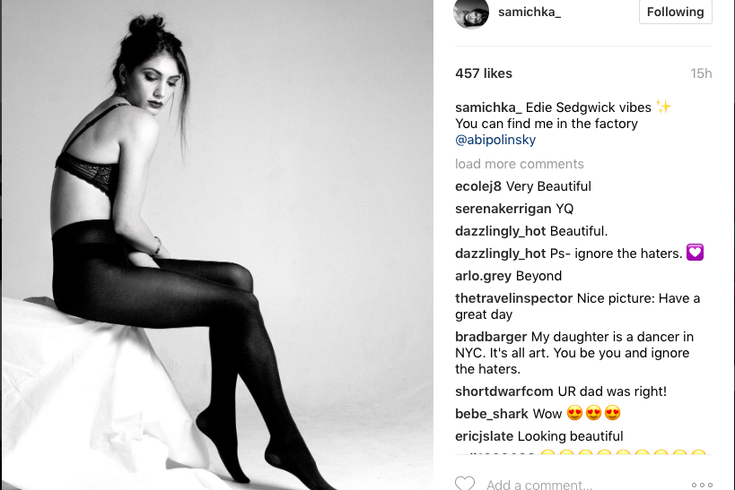 Michael Cohen is both Donald Trump's attorney and father of Samantha, a junior at the University of Pennsylvania. When he posted this photograph of her on May 14, 2017, people responded negatively.

Are you up to speed on the latest "controversy" swirling about Donald Trump’s circle of friends, lawyers and others?

‘Twas Sunday night when his attorney Michael Cohen took to Twitter with some thoughts on his daughter Samantha, a junior at the University of Pennsylvania.

“So proud of my Ivy League daughter ... brains and beauty channeling her Edie Sedgwick. On Instagram @samichka_,” he wrote in a Tweet that included a photo of Samantha looking down toward the ground while sporting a black bra and tights.

Edie Sedgwick was an actress and fashion model of the Sixties who was among the most well-known of Andy Warhol's superstars.

It’s an artsy shot of an attractive woman. To some, it was also a really creepy thing for a father to do, posting a photograph of his daughter in clothing that could be construed as sexy lingerie.

Not helping matters was Cohen’s response – “Jealous?" – to a Twitter user who used a family-unfriendly phrase to describe the image.

The controversy raged into Monday, when people who eschew weekend Twitter return to check in on the latest news/controversy.

In any event, I emailed Samantha hoping to get her thoughts on everything that had occurred since 7:30 p.m.

She had quite a bit to fire back at the haters, so I will present it in her own words (with hyperlinks added later for context) below:

I finished a rough semester with a 3.75 GPA this spring, was asked to model for an up-and-coming photographer and just received some of the proofs.

My father, who has always been supportive of my endeavors, was merely expressing his pride.

There is nothing inappropriate in the picture and those who seek to make it something it is not are merely Trump haters who are using this as an opportunity to stir up drama.

I find it hypocritical that those who consider themselves liberal would criticize a woman embracing her body. There is nothing sexualized about the photograph.

It is homage to Andy Warhol and Edie Sedgwick, it is tasteful and it is demure. There is nothing inappropriate about my taking the photograph or my father's decision to share it.

I am ashamed at these people for their reactions and believe it indicated more about their own perverted mindsets as nothing they are saying has any merit nor is it rooted in any truth.

I want to stand up for women being allowed to embrace their bodies.

I also want to stand up for the idea that people should stop sexualizing women for no reason. There is nothing sexualized about that photo.

I hope that anything I can say can help any girl who reads it know that their arm or the side of their leg shouldn't be used against them. This isn't 1800 where an ankle is sexual.