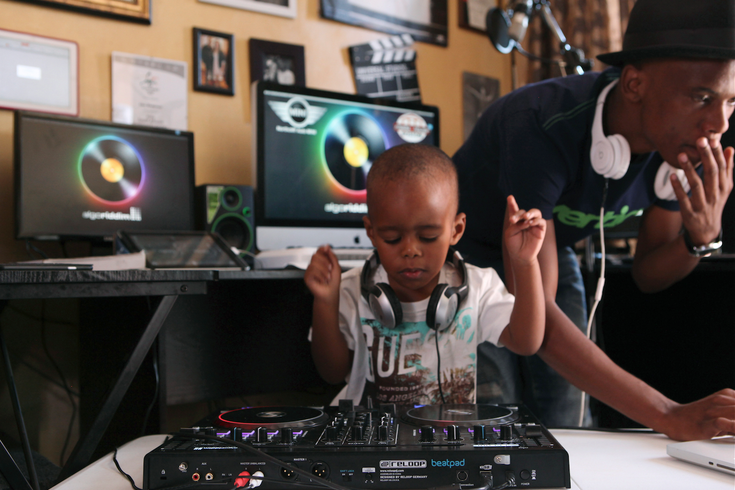 n this Monday, April 6, 2015 photo, two-year-old Oratilwe Hlongwane, also known as DJ AJ to his fans, plays with the buttons and knobs of a sophisticated music system in control of the beat of the bass-heavy house music at his Alexandra home in Johannesbu

A house music phenom on the rise in Johannesburg, South Africa is not what you might consider your typical DJ.

That's because he's only two years old.
Oratilwe Hlongwane, also known as DJ AJ, has rapidly amassed a social media following in South Africa without even fully having mastered speech, the Huffington Post reports.
The toddler's mother, Refiloe Marumo, says that her son's talent quickly became apparent after her husband purchased an iPad, planning to download educational apps for the boy. The father, a gymnastics coach, also bought a disc jockeying app for himself.
Still in diapers, the kid bypassed the math games and went straight to the DJ app, stunning his parents with his ability to manipulate sound effects and cycle between songs. They then bought him actual DJ equipment and he proved he could mix it up on that as well. A cellphone video of him went viral and he soon found himself racking up nearly 25,000 Facebook fans, if that means anything to him.
While DJ AJ has already received sponsorship deals and landed special appearances, his parents are dismissing any criticism that they are exploiting their son. They made clear that he won't be playing in any clubs or at parties.