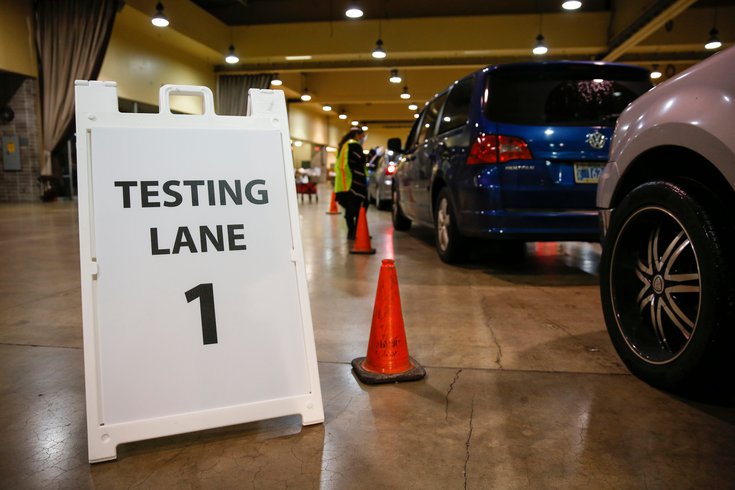 The B.1.1.7 variant has become the dominant form of the coronavirus in the United States, prompting fears of another COVID-19 surge.

The coronavirus variant that overwhelmed the United Kingdom is now the dominant form of the virus circulating in the United States, raising concerns that it will cause a surge of hospitalizations and deaths.

The B.1.1.7 variant represented about 44% of all COVID-19 cases during the latest two-week stretch estimated by the U.S. Centers for Disease Control and Prevention — four times more than the next most common variant.

In Pennsylvania, it accounted for 28% of sequenced cases over a four-week stretch and 32.8% in New Jersey. Many of the more recent cases have been in younger people and linked to youth sports.

As the B.1.17 variant has taken root in the U.S., the country faces a potential fourth wave, even as vaccinations open to nearly all U.S. adults. COVID-19 cases and hospitalizations have begun ticking upward and deaths have stopped declining too.

Still, two new studies offer some reassurance that the variant may not be more severe than previous forms of the coronavirus. The studies found B.1.1.7 is more transmissible but doesn't appear to lead to higher rates of hospitalizations and deaths — contradicting earlier research.

In January, several British studies suggested patients infected with the B.1.1.7 variant had a higher risk of severe disease and death. At the time, the researchers said more data was needed to confirm their findings.

A new study, published in The Lancet Infectious Diseases, examined a sample of hospitalized COVID-19 patients and found no association between the B.1.1.7 variant and severe disease. However, patients infected by B.1.1.7 carried higher viral loads — a sign of its increased transmissibility.

Another new study, published in The Lancet Public Health, looked at the relationship between B.1.1.7 and the types and duration of COVID-19 symptoms. Again, the researchers found nothing that suggested the variant worsened the symptoms patients experienced.

With the variant spreading rapidly in the U.S., vaccinations have become a higher priority. But not everyone agrees on the best way to go about it.

Some experts believe the U.S. should delay second doses of the Pfizer and Moderna vaccines as part of an effort to get initial doses in more people — like the United Kingdom has done. That would increase the number of people who have some immunity against the virus.

A trio of health experts that included Ezekiel J. Emanuel, co-director of the Healthcare Transformation Institute at the University of Pennsylvania, advocated for following the U.K. approach in a opinion piece printed by USA Today.

That piece was printed before federal officials advised the suspension of the single-shot Johnson & Johnson vaccine.

"We need only to adopt the sensible evidence-based policy used in the United Kingdom: Vaccinate as many people as possible with just one dose, by delaying the second dose of Pfizer and Moderna vaccines," they wrote. "Having adopted this strategy, the U.K. has vaccinated 46% of the population and effectively avoided a second surge of the highly contagious B.1.1.7."

They said the U.S. needs to vaccinate about 40 million people to reach the same level as the U.K., adding "that is our best hope of quelling the fourth wave ignited by the B.1.1.7 variant."

Recent research shows that just one dose of an mRNA vaccine is 80% effective and offers protection for about 12 weeks. They said this provides a window for more people to get vaccinated with the first dose.

Other experts agree with this approach, including Dr. Atul Gawande, a surgeon and medical writer, according to The New York Times. Gawande tweeted, "Getting as many people as possible a vax dose is now urgent."

But some experts, including Dr. Anthony Fauci, oppose administering vaccines in a way that was not done during clinical trials.

Fauci, director of the National Institute of Allergy and Infectious Diseases, said last month that the U.S. will not follow the U.K.'s approach to vaccination.

He said lower levels of protection might encourage the development of new variants and foster distrust in the vaccines. So far, there has not been any evidence that delaying the second shot leads to more variants.

The U.K. also instituted a stringent lockdown in response to the surge of B.1.1.7 cases. There hasn't been talk of such a lockdown in the U.S. yet.

The studies published by The Lancet affirmed that the B.1.1.7 variant spreads more easily than previous forms, though they did not find it to be more virulent.

In The Lancet Infectious Diseases study, the researchers analyzed data on 496 people who had been admitted to a London hospital and tested positive for COVID-19. Genome sequencing showed that 198 patients had infections caused by the B.1.1.7 variant. Only 341 of the 496 patients had their samples submitted for genome sequencing.

The researchers found the B.1.1.7 patients had higher viral loads and tended to be younger and with fewer pre-existing medical conditions. This may represent "the widespread and potential increased transmission of this variant in the community or differences in probability of hospital admission," they wrote.

Though their findings contradict earlier reports that the variant is more deadly, the researchers said the variant's tendency to infect more younger people could be "a subtle hint" that the variant does lead to more severe disease "if patients with B.1.1.7 are hospitalized more often." But they didn't find this in their analysis.

The Lancet Public Health study was based on data from 36,920 COVID-19-positive people who used a COVID Symptom Study app between Sept. 28 and Dec. 27. These researchers, from the U.S. and the United Kingdom, also looked at COVID-19 surveillance data from the U.K.

They found that as the variant spread to different regions, there was no change in COVID-19 symptoms or their duration. They also did not find any changes in hospital admission. And less than one percent of the app users ended up reinfected 90 days after their initial infection, suggesting that the current vaccines offer enough protection against the variant.