How to relieve the bloating, indigestion and heartburn caused by your Thanksgiving feast 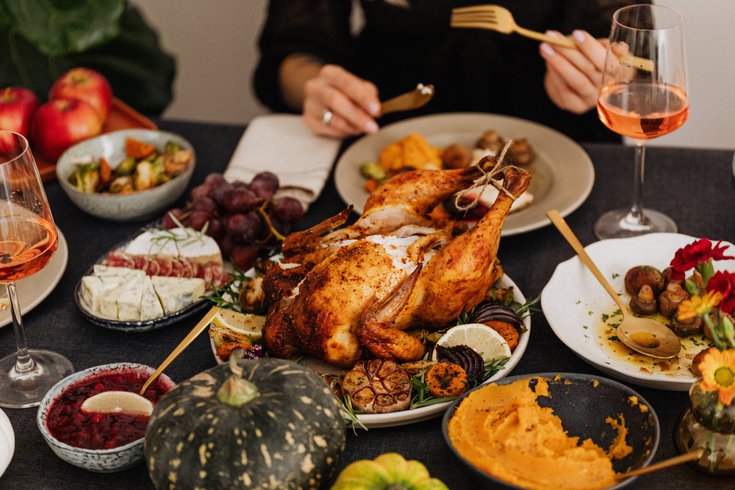 Stomach problems are all to common during the Thanksgiving holiday. Following these healthy tips could limit discomfort from symptoms including bloating, heartburn, nausea and constipation.

The term "food coma" gets thrown around recklessly after big meals, but nowhere is the phrase more apt than after a few heavy platefuls of Thanksgiving grub and a smattering of desserts packed in for good measure.

By late November, the accumulated stress of the year usually creates a perfect storm for people to let loose for a holiday centered on eating. The obvious downside to taking in all that flavor — a lesson learned and forgotten annually — is that it can leave the stomach in a frightful state.

Most people talk a big game about their plans of attack when loading up a Thanksgiving plate, but few play the long game to ensure that the rest of the holiday weekend isn't marred by lethargy and indigestion.

With the right frame of mind and a few good tips, it's possible to minimize the discomfort of overeating.

It's tempting to think that operating on an empty stomach is the best way to maximize the once-a-year cornucopia of Thanksgiving, but this approach might be asking for trouble. It's a good idea to drink plenty of water ahead of big meals. This will prevent your body from leaching fluid from elsewhere on the body, resulting in dehydration and loss of energy. Water also will provide a base of fullness, protecting you from the phenomenon of having eyes bigger than your stomach.

Try to stay away from diet sodas, which contribute to bloating, and avoid too many alcoholic drinks that can lead to overeating, nausea and constipation after a big meal.

It may be assumed that packing a Thanksgiving plate with greens is a healthy choice — and that's true, in moderation. But having too much fiber — like broccoli, beans, brussels sprouts and peas — puts more strain on the body to digest these foods. The same goes for cheesy items, the New York Times reported in its own list of Thanksgiving bloating tips.

Turkey, the main attraction on Thanksgiving, is a great centerpiece for a plate because protein stimulates hormones that regulate appetite about 20 minutes after eating. It's much more likely to feel full soon after consuming protein, which will help guide decisions about how much more to eat during a second or third pass.

To avoid acid reflux, try to stick to lean, white cuts of turkey rather than dark meat. And as delicious as the crispy and chewy bits of skin may be, keeping these fats to a minimum also will help to prevent heartburn.

This advice isn't an invitation to pack in carbohydrates, many of which offer less nutritional value than high-fiber foods, despite the easier route they have for digestion. Carbs may compound the problem if too much of everything ends up on a Thanksgiving plate.

There's no award for ravenous eating at Thanksgiving. Too much gusto can lead to a lot of discomfort, diminishing the initial euphoria from the medley of flavors.

Mindful eating stresses the importance of being present while eating, paying attention to bodily sensations and thoughts about food before, during and after meals. By paying attention to all of the senses activated by food and reflecting on the occasion, it becomes more natural to move at a healthy pace and to be discerning about portions. It also makes picking specific foods a more deliberate choice, enabling greater enjoyment of the meal as a whole.

It's also a good idea to take smaller bites and thoroughly chew food before swallowing. When food is not adequately chewed, it takes longer to break down and stretches the stomach, leading to nausea and indigestion. Focusing on each bite and slowing down allows the body more time to recognize feelings of fullness, leading to healthier decisions about when to stop, or leave room for more later.

Take a walk, sleep on your left side and delay the next meal

The couch may be calling your name after a massive meal, but it's a good idea to take a short walk or try to remain on your feet for a period of time after eating. Standing up can help keep acid reflux under control, thanks to gravity, and walking will aid in the initial stages of digestion.

When it's time to get to bed, a good trick is to sleep on your left side. The anatomy of the stomach is set up in a way that limits gastric juices, such as pepsin and hydrochloric acid, from flowing into the esophagus. Sleeping on your back allows these juices to pool in the stomach and more easily reach the esophagus, leading to more acute heartburn.

As much as Thanksgiving leftovers are part of the holiday experience, consider passing on some of them when offered. At a minimum, it may be a good idea to let about 15 hours pass before having the first meal after a Thanksgiving feast. This can have a number of benefits to the digestive process, can ease gastrointestinal symptoms and may help offset the calorie overload of the night before.

Take peppermint and ginger to ease the stomach

The sensation of overeating is hard to walk back from, but a few natural remedies can help the body recover.

Peppermint oil, which is available in capsules, can minimize bloating and discomfort. It may aggravate heartburn if that is the main symptom, but once that has settled down, peppermint oil will help relieve the other issues, including nausea.

Ginger candies, capsules and tea can also be useful to treat nausea after a big meal, since the spice has anti-inflammatory properties that improve digestion. It also activates the release of hormones that regulate blood pressure, which calms the body down.

Eat a balanced diet over the next few days

It's difficult to avoid eating a big meal on Thanksgiving — that's one of the features of the holiday — but it will go along way to have a variety of healthy foods in reasonable portions during the rest of the long weekend.

Easily digestible foods, such as eggs, toast, bananas, chicken and applesauce can be helpful in restoring the body's natural rhythms. Baked, broiled and grilled foods also will be preferable to fried foods after a big Thanksgiving meal.

By factoring these tips into a meal strategy during the holiday, it may be possible to avoid the most uncomfortable consequences of savoring the occasion on Thanksgiving.