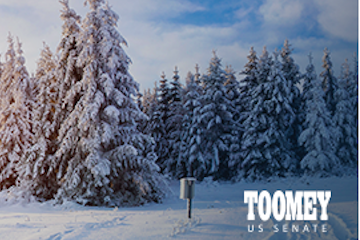 The winter-snowscape photo used in a Pat Toomey campaign-fundraising email drew the attention of a stock-footage tipster.

On Monday, we brought you the story of an anonymous tipster who noticed stock footage in a web ad produced by the campaign of Katie McGinty, who's facing Joe Sestak and John Fetterman in the primary to see who will challenge incumbent U.S. Sen. Pat Toomey in this fall’s general election.

Little did we know, however, that this story would create a cottage industry of stock footage-complaint stories but – lo and behold – it seemingly did just that.

This time, a campaign ad wasn’t the alleged culprit. Rather, a new tipster took notice of a snowscape image included in a fundraising email sent out Monday night.

“If you’re going to write about stock footage, Pat Toomey put out a fundraising email last Monday night with a beautiful, snowy picture across the header,” the tipster wrote. “The trouble is that it's not a picture of a Pennsylvania landscape. It's a picture taken in Ukraine.”

That was interesting enough to draw a "tell us more" response.

This winter-snowscape picture used in a Pat Toomey campaign-fundraising email drew the attention of a stock-footage tipster.

Like McGinty’s ad, the image wasn’t overly positioned as being taken in the commonwealth. However, this tipster took the extra step of tracking down photographer “Standret” via Shutterstock.

He or she then emailed Standret, who lists the location where he shoots landscape and nature photos as being in the Ukraine. The photographer's response – provided to PhillyVoice via forwarded email – was “so this picture filmed in Ukraine … 48.583587, 24.587712.”

Standret's coordinates map-checked as being near a village in Ivano-Frankivs'ka Oblast, Ukraine. That adds up considering the region is located in the Eastern Carpathian Mountains. Ergo, "The Winter Road" photo used was not in the Poconos.

As with the initial McGinty tip, which "exposed" a dynamic engaged by so very many political campaigns across America, we then took this tipster’s accusations to the Toomey campaign on Wednesday.

And, just like the McGinty campaign, a spokesman for Toomey politely declined to weigh in on the latest drama surrounding stock footage.

Oh yeah, just for the record, we will not be posting every time someone sends a "Stock Footage Alert!!!!" our way, but if it continues, expect a whimsical-tips roundup before the April 26 primary (and Nov. 8 general).