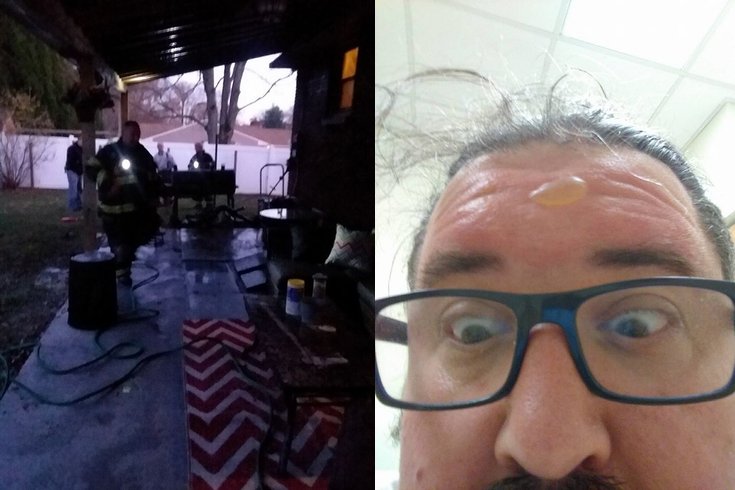 Jason Green shared these photos of his burns and backyard after his turkey fryer burst into flames during Thanksgiving dinner.

A Bucks County man's Thanksgiving became too hot too handle Thursday after an outdoor cooking device burst into flames.

The Penndel Volunteer Fire Company said it was dispatched to a home in the Langhorne Gables section of Middletown Township around 4:30 p.m. for a reported house fire.

When firefighters arrived, a turkey fryer in the backyard was engulfed in flames. Luckily, the fire didn't spread into the house and was extinguished quickly.

RELATED: Here are the top 10 Black Friday Brawl videos of all time

Jason Green identified himself as the man who accidently started the fire. Green, who owns and operates Jay's Steak and Hoagie Joint in Langhorne, said on Facebook the turkey turned out fine, but he forgot to turn the propane off after cooking the bird.

He said his cousin saw the flames while getting up for seconds. Green ended up at the hospital to treat some burns from the fire, and said his shop's store hours would be affected the next few days because of his current condition.

"Like I said yesterday deep fried turkeys are yummy. Just be sure to turn the propane off," Green wrote on Friday. "I always seem to learn the hard way."