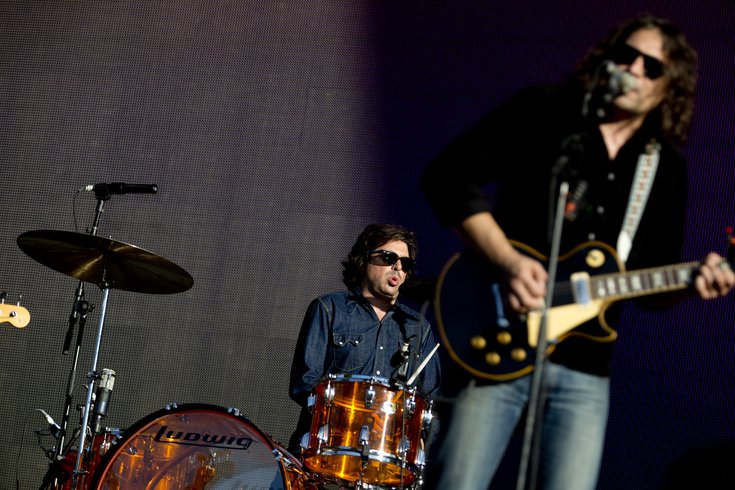 The War on Drugs, shown here during a 2015 performance, will host a second "Drug-cember to Remember," two concerts to be held late in December that will raise money for the Fund for the School District of Philadelphia.

Philadelphians have at least two things to be thankful for heading into the holidays.

Local indie rockers The War On Drugs announced a pair of holiday shows this week, benefitting the Fund for the School District of Philadelphia.

The second annual "Drugcember to Remember" will take place Sunday, Dec. 29, and Monday, Dec. 30, with the venues to be announced the week before the concerts. It's an opportunity for the group to play in their hometown, celebrate a local cause around the holiday season, and perform in more intimate venues than a band of their stature can usually commit to.

Check out the announcement from the band here.

The 2018 "Drugcember to Remember" raised more than $35,000 for Philadelphia's public schools. The War on Drugs played three sold out shows across Philadelphia at Johnny Brenda's, Union Transfer, and the Tower Theater along with Hop Along frontwoman Frances Quinaln.

The full announcement from the band also offered a glimpse that "more ideas are definitely brewing," followed by an Instagram post sharing a new collaboration with Harrisburg’s Little Amps Coffee Roasters and artist and fellow Philadelphia-native Steve "ESPO" Powers.

The specialty Colombia/Nicaragua coffee blend of “DrugCember Beans” offers tasting notes of milk chocolate, citrus, and caramel apple, with artwork on the packaging by Powers. It’s available for pre-order on The War On Drug’s webstore and it will on sale at both holiday shows.

All proceeds from the coffee also go directly to the Fund for the School District of Philadelphia.

We partnered with our friends @littleampscoffee in Harrisburg (one of the best shops in the US) and the one and only, international art icon @steveespopowers to bring you our first ever bag of DrugCember beans!!! Pre order this is in our web store or through the link in our story!! All proceeds from the coffee will also go to the fund for the school district of philadelphia.

Fans hoping to attend either show will have to enter a lottery for the chance to buy tickets. Ticket requests (four tickets maximum per person) can be made through the band’s website and the lottery will remain open until late Tuesday, Nov. 26. Note that you won't be charged if you aren't selected for the lottery, but a service fee still applies.