Selected plan adds protected bike lanes, reduces most of the street from from five lanes wide to three 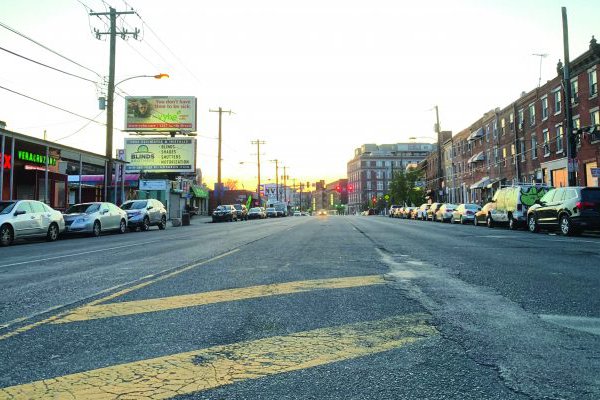 Washington Avenue in South Philadelphia will be repaved and modified beginning in summer 2021. The city selected a plan after a public feedback process found that reducing traffic accidents was a priority among residents, businesses and community groups.

After months of public feedback on several proposed plans, Philadelphia's Office of Transportation, Infrastructure and Sustainability has chosen a future layout for Washington Avenue in South Philadelphia.

The decision to improve the busy corridor was driven, in part, by an analysis of roadway conditions, traffic flow and accidents. OTIS found that there were 254 crashes on Washington Avenue between 2012 and 2018, including a high number that involved pedestrians and cyclists. The stretch had been added to the city's High Injury Network, which monitors areas in need of intervention.

The work will be completed as part of a federally funded repaving project scheduled for summer 2021.

Detailed plans for the redesign are illustrated in the map below.

Source/City of Philadelphia
The three-lane layout will extend from Grays Ferry Avenue to 16th Street and from 12th Street to Fifth Street, as seen in green. The stretch from 15th Street to 13th Street, seen in yellow, will remain as it is today, due to high vehicle volumes around Broad Street. Transitional four-lane, cross-sections – shown in the map illustration in blue – will connect the 3- and 5-lane sections.


Areas east of Fourth Street to Columbus Boulevard are covered by another streetscape improvement project led by the Delaware River Waterfront Corporation.

In a video, city officials further detailed the changes planned for Washington Avenue next year.

As part of the project, traffic signals along the street will be reprogramed to optimize the flow of vehicles with reduced lanes. Slightly longer travel times are expected around rush hour — about 15 seconds per block — as a result of the planned changes. Traffic on surrounding streets is also expected to increase by about 5-10%.

SEPTA Route 64 buses also will have "floating islands" to make it safer for riders to enter and exit the vehicles, reducing interaction with cyclists.

When rating the existing conditions on Washington Avenue, most respondents to the city's survey indicated that they are unhappy with issues such as double parking, faded pavement markings and the high number of crashes. Increased traffic along surrounding streets was rated as a low priority in plans to overhaul the corridor.

The next steps for the project include a final engineering plan for the Streets Department, finalizing parking and loading regulations, and ongoing public communication about the upcoming changes.