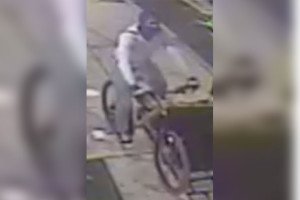 Philadelphia police are seeking this individual and two others who allegedly stole a boy's hoverboard in Francisville on Dec. 27.

Philadelphia police are hoping the public can help identify three teens who, police said, stole a hoverboard from another teenager in the city's Francisville section just days after Christmas.

According to police, the incident occurred on Dec. 27 at 9 p.m. when a 16-year-old boy was riding a hoverboard on the 700 block of N. 19th St. and was approached by three teenagers on bicycles.

Police said that, at that time, one of the bike riders punched the boy and shoved him off the hoverboard before stealing it.

Police said the three suspects then fled and were last seen heading south on 19th Street.