WATCH: Did Melania Trump refuse to hold her husband's hand in Israel? 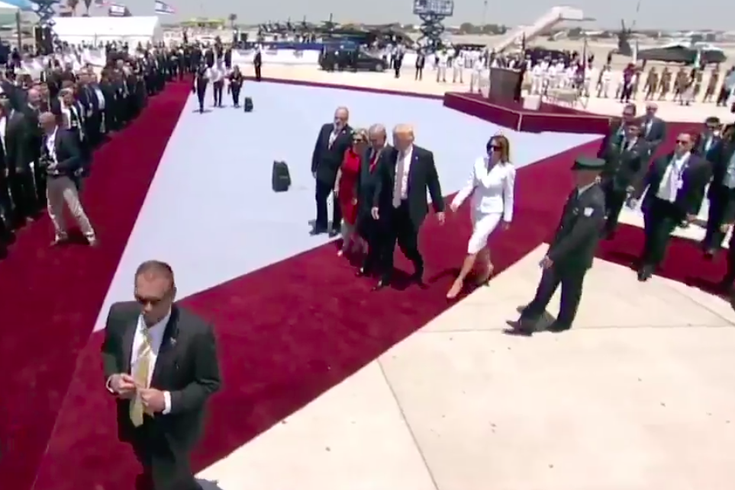 Did Melania Trump slap her husband's hand away when he tried to hold hers on the tarmac in Tel Aviv?

Donald J. Trump, the president of the United States, is in the midst of his first international trip since taking office in January.

It must be very odd for him not to be at a Trump property.

While many important meetings are scheduled when American presidents go abroad, just one day after Trump put his hands on that shiny orb in Saudi Arabia, attention turned to a brief moment as he and First Lady Melania Trump walked the red carpet at an airport in Tel Aviv, Israel.

Specificly, video appears to show Melania swatting her husband’s hand away as he reaches back – because Donald sure doesn't seem to like adjusting his walking pace to his wife’s – and tries to hold it.

Maybe she didn’t realize his hand was there.

Maybe she was swatting at a gnat.

Or maybe she just wanted to show the world that she did not feel like holding her husband’s hand.

Judge for yourself (as many people already have):

Whatever it is, it’s not as if he’d become the first president to have a divorce on his resume should things turn really sour at the White House/Trump Tower/Mar-a-Lago.

Courtesy of a pair of previous divorces, he’s already the second divorced president in American history. Who was the first? Ronald Reagan. #TheMoreYouKnow