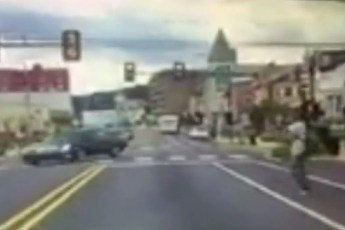 Authorities in Coatesville have arrested a homeless man who threw a rock at the dashboard of a police cruiser Monday afternoon on East Lincoln Highway.

The incident occurred at around 2 p.m. near the intersection of North Fifth Avenue. Coatesville Police Officer Jared Davis was driving on patrol when the suspect, identified as 29-year-old Eric Watson, wound up with a rock and threw it at the vehicle with full force, shattering the windshield.

Dash cam video of the incident was released Monday night by the Coatesville Police Department.

After Officer Davis exited the vehicle, police say Watson attacked him and attempted to strike him in the head several times with the same rock he threw. An initial attempt to arrest Davis was unsuccessful until back-up officers arrived and wrestled him to the ground.

One of the officers involved in the arrest suffered a broken sternum during the altercation, police said.

Watson, described as a Jamaican national who has been homeless for four years, has been charged with aggravated assault on a police officer, institutional vandalism, resisting arrest, and related crimes. He was arraigned and remanded to the Chester County Prison in lieu of $100,000 cash bail.