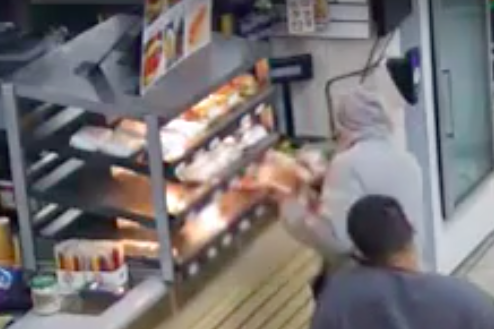 Police are searching for two male suspects who robbed a Quick Stop in Kensington on April 15.

Philadelphia Police have released a surveillance video showing a robbery involving a masked man swiping several hot sandwiches off a heating station on the counter of a Kensington Quick Stop.

As seen in the video and based on the related police report, two suspects, one of whom was not wearing a mask, entered the Quick Stop at 3001 Kensington Avenue at around 10:45 p.m. on April 15 and approached the store employee behind the counter, reportedly telling him to “give me everything in the register.”

Police said the employee fled through a back door leaving the two suspects inside, at which point the masked bandit swiped the sandwiches and both fled. There is no word on whether they stole any money.

Police added that the unmasked suspect appears to be the same person who robbed the store on April 9.

The suspects' descriptions are posted in the video, below. Anyone with information about this crime or these suspects is being asked to contact East Detective Division at 215-686-3243/3244.