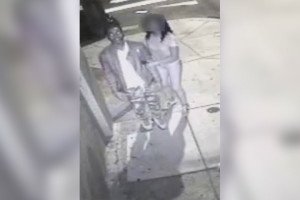 The Philadelphia Police are hoping the public can help identify two boys, who police said, beat a 51-year-old man and stole his bike in Point Breeze on Dec. 13.

The Philadelphia Police are hoping the public can help identify two young assailants who are suspected of beating a 51-year-old man until he was "semi-conscious" and stealing his bicycle during an incident in Point Breeze on Dec. 13.

According to police, on Sunday, Dec. 13 at about 9:26 p.m., two black male youths, described as being between 12-15 years old, one wearing a black hooded sweatshirt, assaulted a 51-year-old man who was riding his bicycle on the 1500 block of South 16th Street.

WATCH video police have released of the incident here:

The victim told police, law enforcement officials said, that the boys punched the victim several times in the face, then pushed him off his bicycle, and onto the ground.

While on the ground, the boy wearing a black hooded sweatshirt, stole the man's bicycle, police said, before they fled west on Tasker Street from 16th Street

In a release Thursday, police said that the victim was semi-conscious as a result of this incident and was transported to Methodist Hospital by Medic for injuries to his face and mouth. He was listed in stable condition.