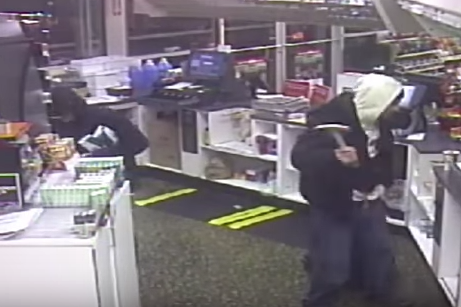 Police are searching for two suspects they say raided a Northeast Wawa and fled with a trash bag full of cigarette cartons.

Philadelphia police are searching for two suspects they say raided a Northeast Wawa and took numerous cigarette cartons after bashing the store's registers with a hammer.

The incident happened Monday shortly before 6 a.m. at the Wawa on 14101 Bustleton Ave. in Somerton. Police said that the male suspect allegedly told a 32-year-old employee to "move out of the way." Surveillance footage released Tuesday then allegedly shows the female suspect grabbing the cartons while the male suspect begins hitting the cash registers with a hammer.

Both left the store armed with a trash bag full of cigarettes, heading north onto Philmont Avenue toward Street Road, according to police.

The first suspect is described as a male who is 6 feet tall with a medium build. He was wearing a white hooded sweatshirt underneath two black jackets and blue jeans.