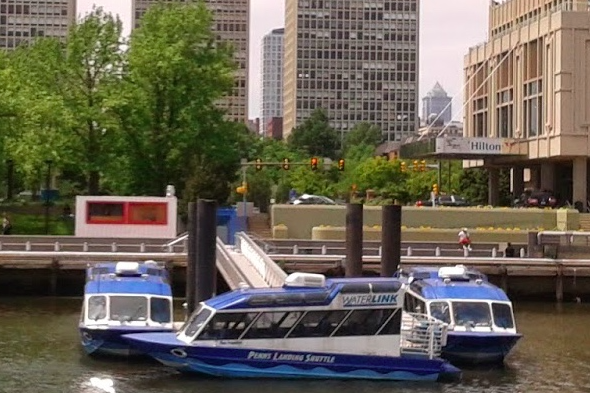 While Pennsylvania lawmakers, including Senators Pat Toomey and Bob Casey, have given their endorsement to the project and confirmed federal funding for a new feasibility study, one member of the UrbanPHL group has suggested an alternative option in the meantime: water taxis.

This may be one of the most potent, realistic ideas for shovel ready service out of any transit plan. Rather than extensive capital costs, all components are already in place, fully funded, waiting to be put to use. If done right, there are no additional capital expenditures and all operating costs are fully funded.

According to Liefer, the three water shuttles, each seating 24 people, could follow a route to four existing docks along a 5.84 mile stretch of the Delaware River: Penn's Landing, Columbus Blvd. near Dave and Buster's, the RiverLink Ferry at Walnut Street, and the Navy Yard ferry dock. At an average cruising speed of about 16.1 mph, a one-way trip would take an estimated 22 minutes, which compares favorably to the 15-25 minutes it now takes for an express bus shuttle service to make the same trip. 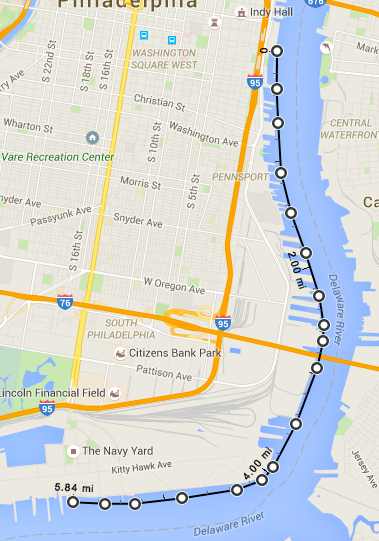 With approximately 150 businesses and 11,000 employees currently based at the Navy Yard, the need for direct access is becoming more and more of a necessity. Plan Philly reports that the hub is adding about 1,000 jobs a year, and according to Curbed Philly, projects to have about 30,000 workers once it's fully built out. Already, more than 270 historic buildings in the Navy Yard area have been the subject of negotiations for residential housing development.

The DRWC currently plans to use the three water taxis to supplement ferry service for high volume events such as concerts at the Susquehanna Bank Center. Liefer argues that the dual potential for the water taxis as drivers of business and tourism makes too much sense to ignore.

This unique water shuttle service provides the chance for the Navy Yard to strengthen its brand, build up neighborhoods, and support the existing DWRC fleet. With the right corporate sponsorships, this service could be provided for free and come at no cost to DWRC. Everything is in place, it is now time to move the final pieces into place to make this service a reality.

In light of the lengthy, multi-decade process that would accompany a Broad Street Line extension, estimated at a cost of $370 million in a now-outdated 2008 feasibility study, the water taxi proposal could be a provisional step toward connecting the Navy Yard to the rest of Philadelphia and the growing workforce it serves. Findings from the latest feasibility study on the Broad Street Line extension will not be published before the end of 2016.