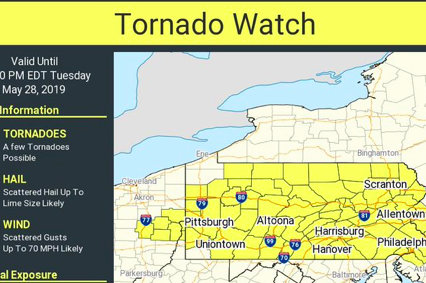 Nearly all of Pennsylvania has been placed under a tornado watch on Tuesday as powerful storms barrel into the region from the Midwest.

The National Weather Service issued the watch Tuesday afternoon and said it will remain in effect until 10 p.m.

A tornado watch has been issued for parts of New Jersey, Ohio, Pennsylvania and West Virginia until 10 PM EDT pic.twitter.com/cMF9qEIiSc

"Some storms could be severe, with hail, damaging winds, gusty winds and heavy rain," the NWS said in its forecast for the evening.

One person was killed and more than 90 others injured as the same storm system swept through Indiana and Ohio on Memorial Day.

Forecasters believe as many as 53 tornadoes touched down across the U.S. on Monday, continuing an unusual pattern of outbreaks that have occurred this year.

In Pennsylvania, 16 confirmed tornadoes this year marks more than the state had in all of 2018 — and that's before the peak season in June and July.

Some of the worst of Tuesday's storms could arrive during the evening commute.

Chances of showers and storms are expected throughout the rest of the week.