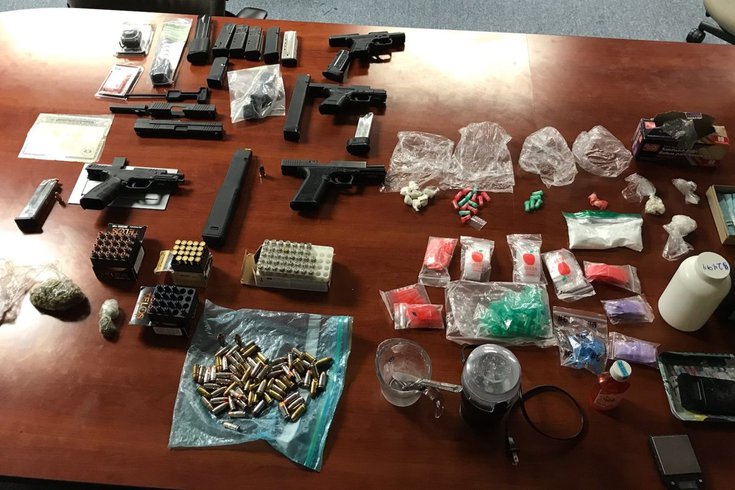 Pennsylvania Office of the Attorney General/Courtesy

Members of the Pennsylvania Office of the Attorney General's Strategic Response Team and the Philadelphia Police Department collaborated on a targeted investigation into drug trafficking in West Philly. Attorney General Josh Shapiro said the joint effort led to 65 arrests and the confiscation of 41 guns over the course of six months.

A collaboration between the Pennsylvania attorney general's office and Philadelphia police led to 65 people charged with gun- and drug-related offenses over the course of six months in West Philly, Attorney General Josh Shapiro said Monday at an intersection in Cobbs Creek with police and community members by his side.

Shapiro said his office's Strategic Response Team began a partnership with police in Philadelphia's 18th and 19th districts in April to target hotspots for drug trafficking. In addition to confiscating more than 200 lethal doses of heroin and other narcotics, he said authorities took 41 guns off the streets and seized $82,000 — "the fruits of that illegal activity."

"This is more evidence that too often drug dealing and violence go hand in hand, and drug trafficking is a violent enterprise," said Shapiro, who highlighted the operation's early results as evidence of what happens when law enforcement agencies collaborate effectively. Philadelphia has reported more than 370 homicides in 2021 and is on pace to reach the 500 mark for the first time since 1990, but the attorney general and Police Commissioner Danielle Outlaw said violent crime is down from 2020 in the areas targeted by their joint efforts.

"We know that law enforcement agencies cannot operate in silos. We just can’t," Outlaw said. “There is a continuous need for our agencies to work hand in hand with one another in order to make our communities safer places to live, work and to play."

Pennsylvania Office of the Attorney General/Courtesy

Above: Evidence seized by the Pennsylvania Office of the Attorney General's Strategic Response Team during a joint operation with the Philadelphia Police Department in West Philly.

Shapiro said all of the guns seized during the six-month span will go through his office's Track + Trace Program, which will determine who bought the weapons and if they have been used in other crimes. Three of the 41 guns confiscated were "ghost guns," according to the attorney general, which means they were sold in parts without serial numbers, making them difficult for law enforcement agencies to trace. Ghost guns also are not subject to background checks, providing an avenue for people who cannot legally purchase a firearm to obtain one.

Shapiro did not name any of the people who were arrested as a result of the collaborative effort with Philadelphia police, nor did he say what charges they face. When asked if any of the people arrested had connections to one another, he said, "This is not one broad unit. Some of them were working together, some weren’t, but all of them were wreaking havoc on this community."

AG Shapiro announces the preliminary results of a collaborative partnership to stop gun violence in Philadelphia between his office and the Philadelphia Police Department.

The attorney general's Strategic Response Team has been working a similar operation in Kensington since 2018, according to Shapiro's office. In June, authorities in that neighborhood confiscated seven firearms, one of which was a ghost gun, more than 8,000 doses of heroin and fentanyl and 1,500 grams of crack cocaine.