The Malvern artisan was a pioneer in the studio craft movement during the early 20th century, creating expressive furniture pieces 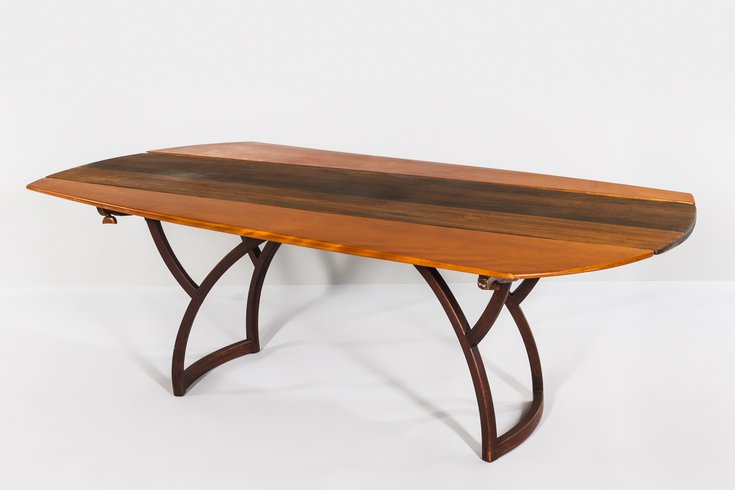 A 7-foot-long, wagon wheel table made by influential Chester County craftsman Wharton Esherick will be auctioned off this month.

Wharton Esherick made a huge impact on the worlds of woodworking, design and architecture from his secluded Chester County studio. One of his hand-crafted tables is expected to fetch as much as $70,000 in an online auction this month.

The wagon wheel table, one of Esherick's more modest creations, gets its name from the distinctive design of its legs, which resemble two wagon wheels cut into several pieces. The warm tones provided by its rosewood, ash and birch materials make the table feel like an antique from the pioneer era.

Esherick was at the forefront of the studio craft movement in the early 20th century. At a time when most furniture and other household items were manufactured in high-volume factory settings, Esherick and his counterparts were focused on carefully crafting one-of-a-kind pieces by hand. They channeled their intellectual and emotional energy to create functional items that also were highly expressive.

The movement prioritized traditional craftsmanship, but it was still forward-facing. This was particularly true of Esherick's work, which bridged the warm, classical styles that defined 19th century American design and the sharp, modernist approach that became popular following World War II.

Esherick's designs were so well-regarded by his contemporaries that in 1940 some of his furniture and one of his signature spiral staircases were featured in a model home at the World's Fair in New York City.

The 7-foot-long wagon wheel table being put up for auction is sleek and streamlined, almost like an automobile of its vintage would be. The way the 3.5-foot-wide main body of the table contrasts with the lighter, 10-inch wings resembles a racing stripe. The design of the legs makes use of smooth, simple curves reminiscent of a fender snaking around a tire.

The table is one of several pieces commissioned by Esherick's friend Alexander Hilsberg, a violinist who was once an associate conductor for the Philadelphia Orchestra. He also taught at the Curtis Institute of Music and the New School of Music.

The auction will begin at noon Saturday. Bids can be placed on Skinner Auctioneer's website until 7 p.m. Sunday, May 24. 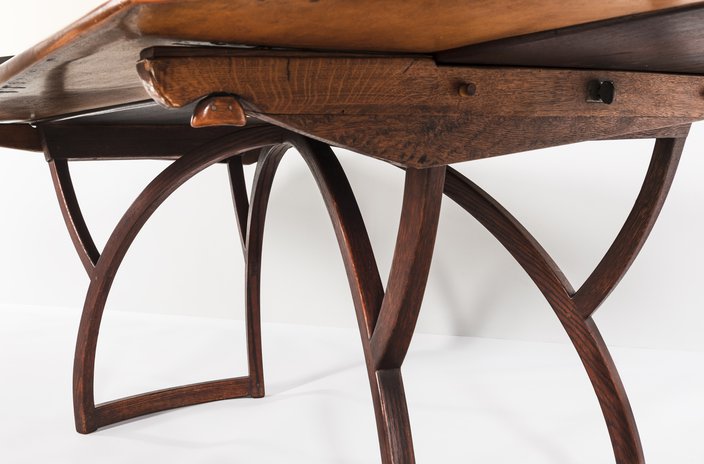 The wagon wheel table by Wharton Esherick gets its name from its distinctive feet, which resemble two wagon wheels.

The wagon wheel table likely was built at Esherick's studio in Malvern, Chester County, which has since been turned into a museum. He moved to the rural property in 1913 and worked there until he died in 1970.

Most of Esherick's pieces remain in private collections, so the museum is the best place for the public to get a sense of his work. Visitors must make reservations on the museum's website. 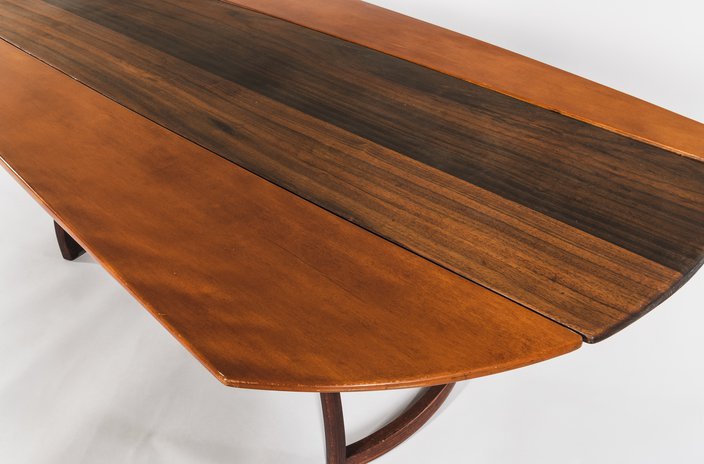 This wagon wheel table made by Wharton Esherick is composed of rosewood, ash and birch.

Esherick was born into a wealthy West Philadelphia family in 1887. He studied at what's now the University of the Arts and the Pennsylvania Academy of the Fine Arts.

He tried to make it as an illustrator and a painter, but he didn't find success until the early 1920s when the hand-carved wooden frames he made for his canvases became popular.

Esherick then moved into the world of furniture and architecture.

In 1935, he designed a house for Judge Curtis Bok in Gulph Hills, Montgomery County. The interior featured a distinct, angular style that fused the modern aesthetics of cubism with the warmth of hand-carved wood.

The house, which took three years to build, was torn down in 1988. Some elements of the house, including a door and a fireplace, were saved and are now on display at the Philadelphia Museum of Art.

Esherick also became involved with an artist's community in Rose Valley, Delaware County in the 1920s. He contributed to the Hedgerow Theater, which still stands, by printing posters, creating theatrical sets and constructing staircases. One of his signature spiral staircases still stands in the theater's lobby.