What's next for the Eagles at the trade deadline? 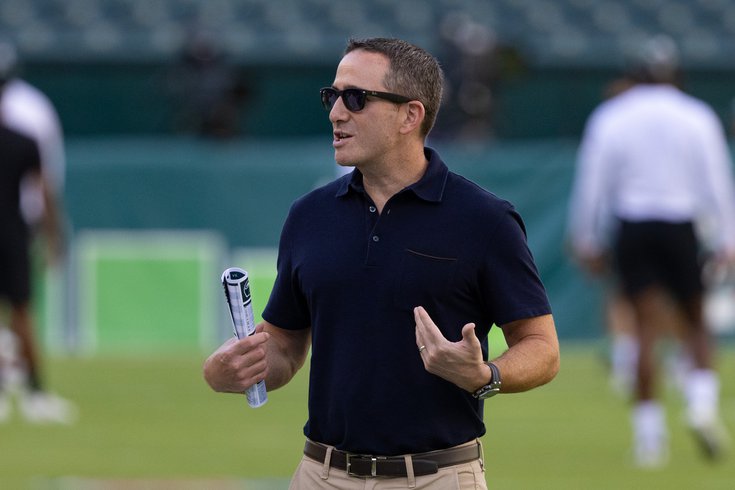 As expected, Howie Roseman and the Philadelphia Eagles were buyers at the NFL trade deadline, landing defensive end depth in Robert Quinn from the Chicago Bears. Roseman struck earlier than he normally does, as past acquisitions have typically come closer to the deadline. For example:

Quinn was acquired on Wednesday, six days before the November 1 deadline, and ahead of the NFL's Week 8 slate of games that could push some teams that are on the fence into sellers if they lose this weekend. The deadline could also serve as a last chance for teams to lower their demands for players that are currently overpriced.

The Eagles' primary objective was to replace Derek Barnett, who was lost for the season Week 1 with an ACL tear. While Barnett may not be viewed by the fan base as a big loss, the reality was that the Eagles envisioned a prominent depth role for Barnett. When he went down early in the second half against the Lions, Barnett had already played a dozen snaps.

Going forward, not that "NFL sources" are really needed to confirm the obvious, but Roseman and the Eagles are continuing to look to improve their roster for the stretch run, per NFL sources. It is believed that the most likely position that they will address is running back.

That is not an indictment on the performance of Miles Sanders, who the team has been happy with so far this season. However, Sanders already has 105 carries this season, putting him on pace for 298 on the season. His previous season high was 179, when he was a rookie in 2019. He missed four games due to injury in each of the last two seasons, which included missed games at three separate points during the 2021 season with three different injuries.

The Eagles' depth at running back is shaky. They have been patient so far with Kenny Gainwell as the two-minute and passing down back, but the Eagles fear a dropoff in performance if Sanders were to get hurt and either Boston Scott or Trey Sermon would have to fill in and carry the load.

The Eagles reportedly kicked the tires on Christian McCaffrey, making an offer well short of the San Francisco 49ers' "winning" compensation package that included second-, third- fourth-, and fifth-round picks. The running back market had something of a correction when the Jacksonville Jaguars dealt James Robinson to the New York Jets for a more palatable conditional mid-Day 3 pick.

Some of the speculated running backs thought to be available are Melvin Gordon (Broncos) and Cam Akers (Rams) in the bargain bin, with players like Kareem Hunt (Browns) and David Montgomery (Bears) costing a little more (think early-mid Day 3 pick on each player).

The other interesting player to watch is the Saints' Alvin Kamara, whose name originally popped up from an anonymous Twitter account. That account later claimed that the Saints were looking for the Eagles to trade them a potential top five overall pick to land Kamara. Obviously, there isn't a snowball's chance in hell of Roseman giving up anything remotely close to a first-round pick for 27-year-old running back, much less that pick, so, you know, huge grain of salt and whatnot.

Still, that account may have stumbled onto something. When asked about Kamara's availability, a league source (to my surprise) did not immediately dismiss that possibility, noting that Roseman kicks the tires on everything and the Saints are unpredictable. Kamara was arrested on a felony battery charge in February. His case is not expected to be resolved through the courts until after the season, and the NFL is not expected to punish Kamara until the legal process plays out. But a suspension is on the horizon. The Eagles and Saints struck a surprise deal earlier this season when the Eagles landed an unhappy Chauncey Gardner-Johnson at a bargain price. The Eagles and Saints would each have to clear substantial financial hurdles to get a Kamara deal done, so to be clear, pulling something off on that front is a longshot.

There is also the possibility of some other cool running back we don't even know about. As a reminder, Ajayi was not a hot name publicly at the 2017 trade deadline.

The other position that many have suggested should be of interest to the Eagles at the deadline is safety depth. Our sources were unaware of any specific inquiries made by the Eagles on that front.

And finally, there's Andre Dillard, whose availability we have already covered at length. Broken record alert: The Eagles are listening, but they expect a very good return. A recent ESPN column suggested a cost of a third-round pick for the Eagles to part with Dillard. Our source indicated that a third-round pick is not likely enough to get it done.