Where to get late-night eats in Philly (and why aren't there more of them?)

There's never a worse time to be hungry in Philadelphia than at 2 a.m.

Not to discredit the slew of wonderful late-night eats the city does have (some of which we've highlighted below), but Philadelphia's certainly no Chicago, where you can grab Thai and ice cream until 5 a.m.; or Austin, where food trucks sign contracts to be able to camp right outside of bars late at night; or New York, where you can eat ... well, just about anything your heart desires until you stumble on home.

So, what's the deal, Philly?

"Location is what it comes down to," Paul O'Neill, a professor of fine dining and director of special projects for Drexel's School of Hospitality & Tourism, told PhillyVoice.

O'Neill explained that one big part of Philadelphia's (relative) lack of late-night options is that eateries are scattered and sometimes difficult to pinpoint -- especially if you're an out-of-towner. One spot might be in Chinatown, the other tucked away in a neighborhood nook and cranny. And, unless you're looking for delivery or have a spot directly next to you, journeying to a restaurant at 3 a.m. can be an exhausting decision to make.

"I also think bundling comes into play," he said. "[Restaurants] are going to have to tie in with other businesses. And that could be a food truck, where they work out something along with another food truck to come out to their spot at 2 a.m., as opposed to having just a random location."

That late-night restaurant "bundling," he said, is best demonstrated in the Gayborhood, where Voyeur Nightclub patrons exit and are immediately next to a grab-and-go late-night pizza shop (the recently closed "Homo Hut") and IHOP.

The food truck idea, meanwhile, is one that's feasible, but would require legislative action to make a reality.

"Late-night vending is absolutely something we'd like to see because there's an opportunity there," Robert Mitchell, president of the Philly Mobile Food Association, told PhillyVoice. "The precursor to that is getting the 'no-fly-zone' laws currently in place lessened."

By "no-fly-zone," he means the vending restriction food truck vendors face in Center City. Considering so much of Philadelphia's nightlife exists downtown, it would be difficult to make much of an impact on Philadelphia's late-night scene without that ban lifted first.

Beyond that, food trucks are also required by the city to cease operations by midnight. Though, you might catch food trucks like Calle Del Sabor, Smokin' Tacos and Side of the Road Jerk Chicken between midnight and 3 a.m. at the intersection of Girard and Frankford avenues on a Friday or Saturday night. Not because it's legal, Side of the Road Jerk Chicken owner James Leggett told PhillyVoice, but because -- in his experiences -- shutting down the after-hours food trucks tends to not be a "priority" for law enforcement at that time of night.

Mitchell said the closest thing to a legitimate late-night food truck bundle are proposals that would have trucks take over currently vacant, private lots in Center City and Manayunk until midnight -- a contract-based negotiation that's legal as of April.

"Two of the spaces we submitted, and they didn’t go to council before recess, but we really liked [a lot] on Front and Chestnut streets, and we liked a lot in Manayunk," he said. "Those two made a lot of sense because you could catch that late-night traffic, and offer consumers choices."

Which, ultimately, sums up what Philly could use more of after hours: more choices.

For now, anyone serenaded with a stomach growl past 1 a.m. can skip the usual GrubHub scroll and take a gander at the following late-night eateries. 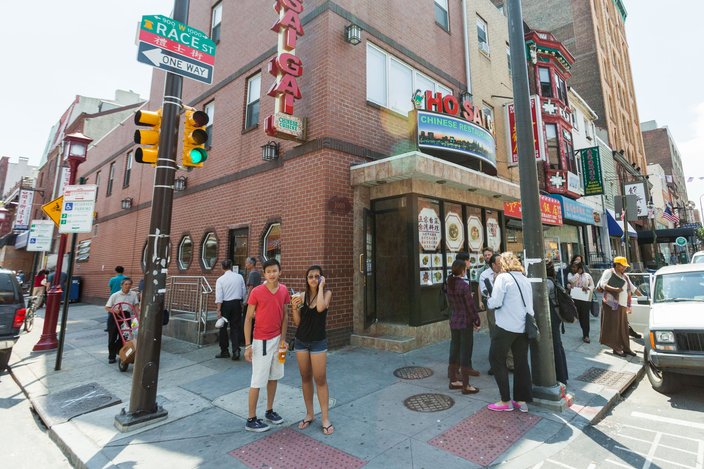 Chinatown is arguably the most notorious downtown destination for late-night eats in Philadelphia, and Ho Sai Gai just happens to be a diamond shining through a smattering of solid options. Industry folk tend to flock to David's Mai Lai Wah (open until at least 3 a.m. all week), but Ho Sai Gai's relatively low-key atmosphere, paired with a bowl of free egg noodle crisps the size of your head makes it a go-to if you need a little quiet after a loud night out. 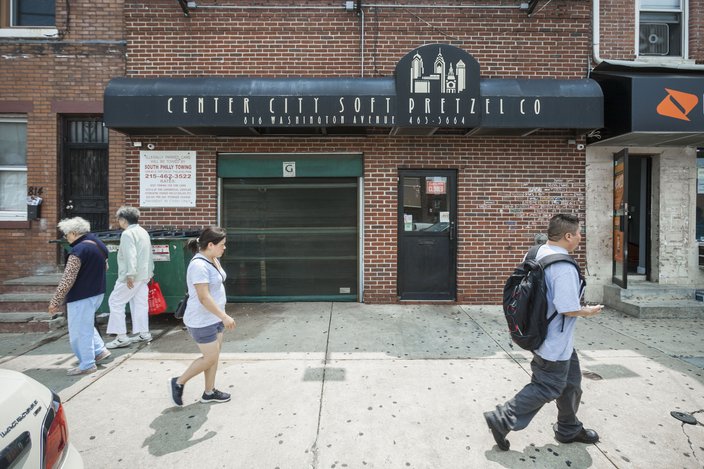 Because the owners work "baker's hours" anyway (to meet daytime bulk orders), the Washington Street space -- which has been around since 1981 -- is kept open through the night with a sort of "Why not?" philosophy. Stop by at all hours of the night (or morning) for one of these freshly baked pretzels, made simply with flour, yeast and water, and offered in all sorts of cool shapes. The company also recently started to offer a whole wheat option. 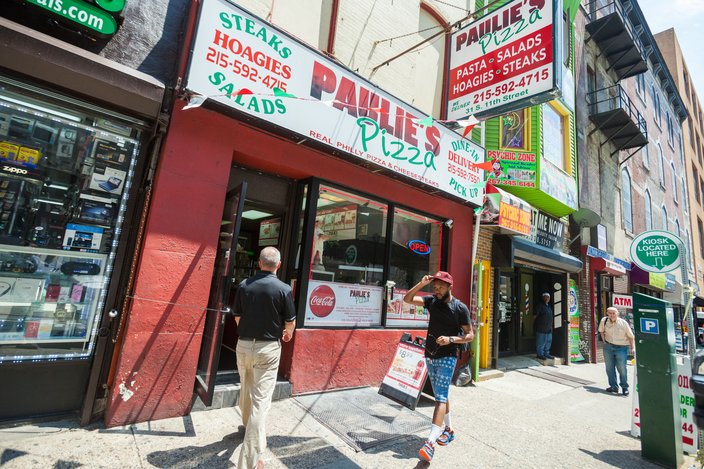 Though it's open until 4 a.m. with its standard American fare and specialty pies (get the lasagna pizza), you might consider putting in your (free) delivery order well before you get home from your bar crawl.

"There are times when we have to turn down people at 4 a.m.," Paul Giambanco, owner of Paulie's Pizza, told PhillyVoice. "What's surprising is how everybody makes a phone call and [drunkenly] expect their pizza to show up [Laughs]."

Because he grew up with the late-night Jersey Shore business, Giambanco's not necessarily bothered by his late-night crowd -- he even enjoys it, he said. But please, just one thing he asks of customers: Be patient. 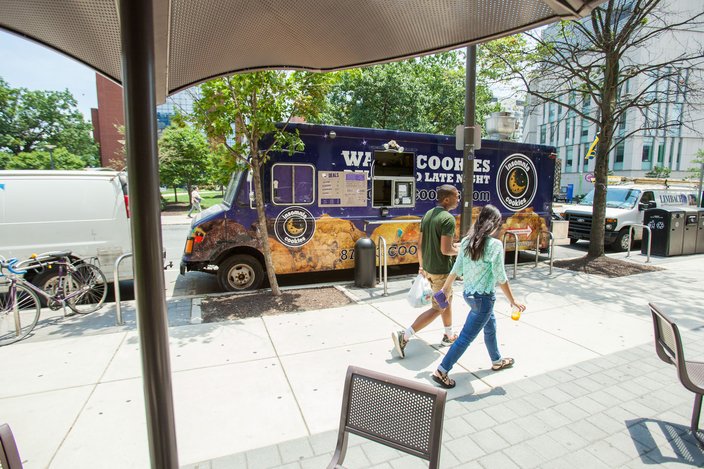 It's the obvious spot to go to when all of the Rittenhouse bakeries have closed for the day.

Born out of University of Pennsylvania student Seth Berkowitz's late-night cookie cravings in 2003, the brand has since spread to more than 50 locations across the country -- though, it still keeps Philadelphia as its headquarters and divides business between storefronts in Center City in Manayunk, and food trucks in University Center (pictured) and on Temple University's campus.

Tip: Save yourself the internal debate and indulge in the variety box. Because night-time eating's all about otherwise regrettable food decisions anyway, right?

Burgers and booze on the avenue: P'unk Burger 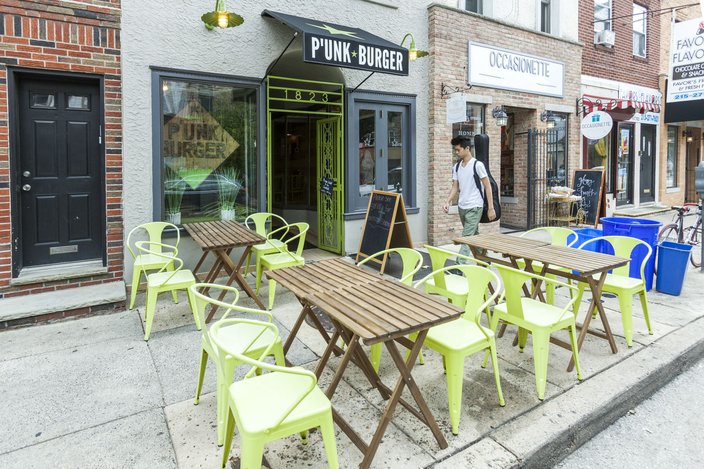 Considering co-owner Marlo Dilks has cornered the late-night market on burgers, it's a no-brainer to head over to P'unk Burger past 1 a.m. -- especially if you live on East Passyunk Avenue.

To boot, the restaurant is BYO, making it perfect for continuing late-night festivities while filling your stomach.

Her late-night hours, Dilks told PhillyVoice, was a decision spurred by what East Passyunk Avenue restaurant workers told her was a need.

"When you work in the industry and close at 11, there are limited places to eat, so you rely on a diner or fast food -- or you just go home," Dilks said, explaining that many people on East Passyunk complained that they had nowhere nearby to go at night. "I'd like to see more [late-night places]. But it is a catch-22: of course I want more places to open up, but then there’s [more competition]. But in San Fran and New York, they’re open late. And Philly, we're a big city too."

Where to grab a dog by moonlight: Underdogs 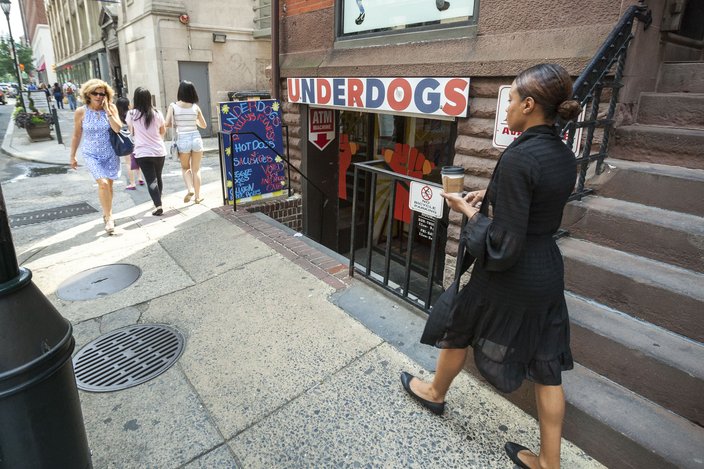 No, that free Voyeur hot dog isn't your only option for a dog late at night.

Underdogs offers a full menu until 4 a.m. on Fridays and Saturdays, consisting of hot dogs, sausages and veggie dogs. And while it's not exclusively an industry crowd, it is pretty likely that most of its late-night diners are just getting out of work.

"We happen to do a lot with the restaurant industry because, late at night, diners are the only options," owner Robert Amar told PhillyVoice. "The variety is so much more extensive and the quality so much better than at late-night diners, so I like to say this is a great place to go when you’re drinking, but also a place you’d choose to go to while you’re sober." 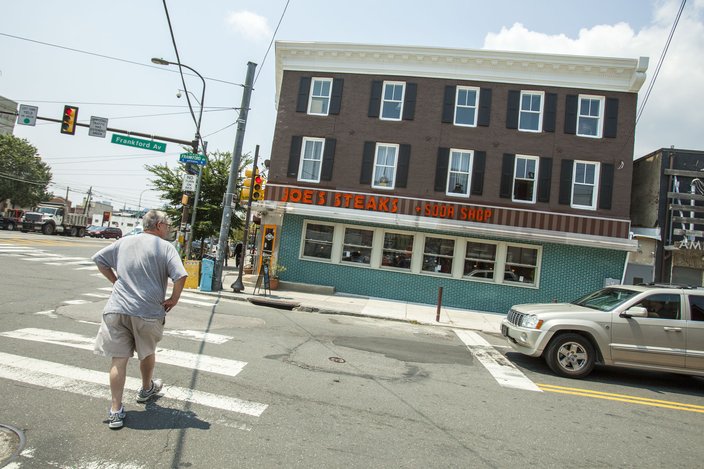 Joe's Steaks and Soda Shop is the newest addition to the late-night lineup, and easily the most obvious go-to for Fishtown and Northern Liberties post-Darling's Diner. Located just off of the Market-Frankford Line, it's also pretty convenient for an on-the-way-home steak or milkshake.

It's a conscious effort to snatch up the late-night crowd in the neighborhood.

"That was our main objective for [staying open late] on Fridays and Saturdays," Patrick Groh, manager of the store and son of owner Joe Groh, told PhillyVoice. "We're pretty busy once the bars let out between 1 a.m. and 2:30."

The most popular late-night order: the cheesesteak, of course. 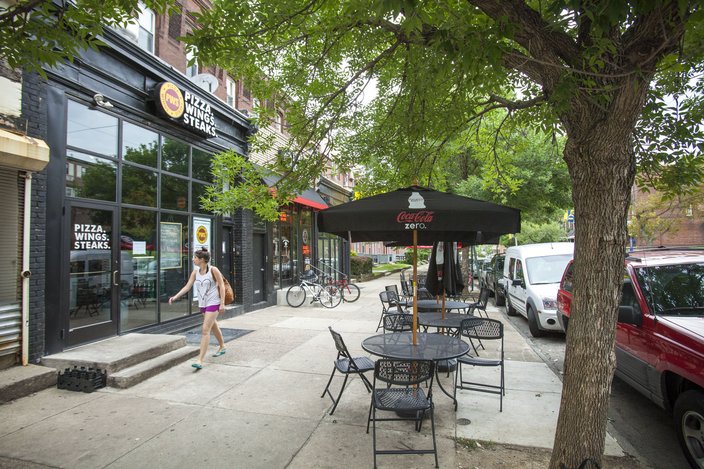 Late-night-hours: 10 a.m. to 3 a.m. every day during the semester (Fridays and Saturdays otherwise)

Moser's theory about why there aren't more late-night eats is that it's difficult to find reliable staff for 3 a.m. dining. It can also be expensive, he added.

While the pizza shop, renovated last May, is best known for its $6.25 two-slices-and-a-drink offering, it's also surprisingly vegetarian-friendly. You'll be hard-pressed to pick up an order of veggie wings (seitan) or veggie pizza elsewhere at 3 a.m.

Moser emphasized that all of its offerings are homemade -- the BBQ sauce, the marinara sauce and dough.

"People assume that because you're a late-night pizza shop, you must be buying your pizza sauce or barbecue sauce," he added. "Not true." 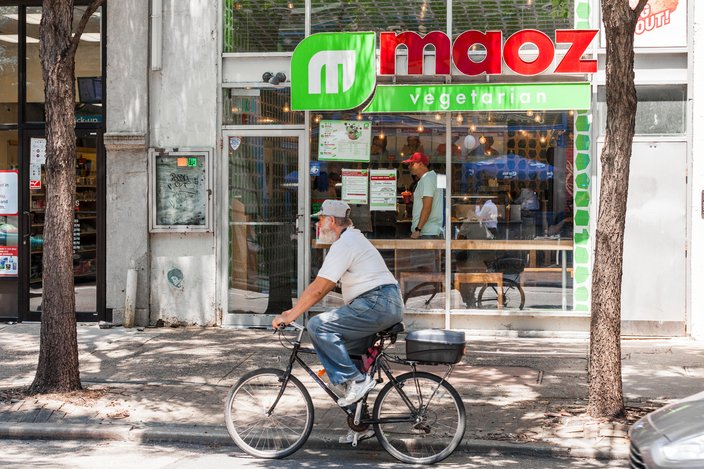 Consider it a "working with what we've got" situation for most vegetarian bar-hoppers or restaurant workers. The Walnut Street location is closed by 10 p.m. during the week, but pop on by before 3 a.m. on Fridays for a selection of Mediterranean sandwiches or a falafel -- certainly the only place you'll grab the latter past 1 a.m. 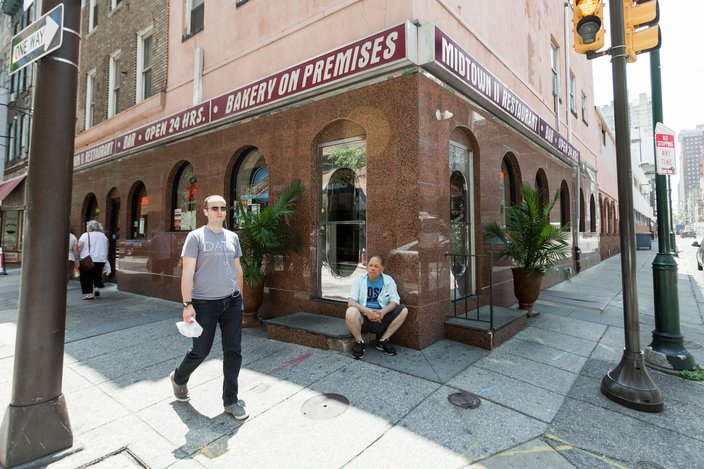 While Melrose Diner might be the more comfortable option, and Midtown III is certainly more convenient for anyone hitting up the Rittenhouse nightlife circuit, the sheer madness of Midtown II past 2 a.m. is part of its charm. Kick back, slap some butter on your (White, wheat or rye?) toast, and relax. 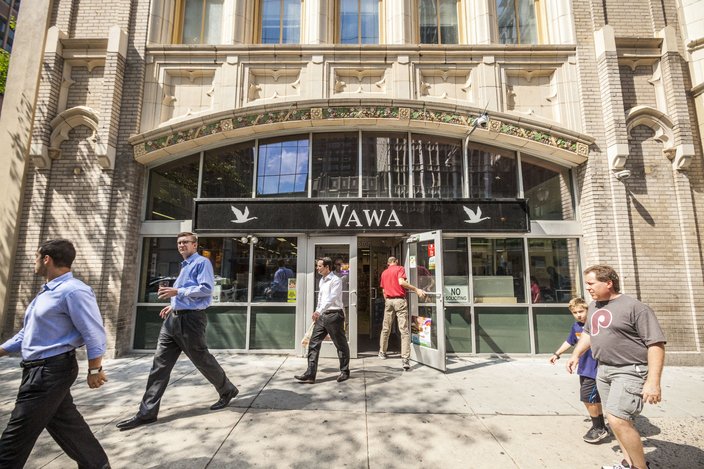 Late-night hours: C'mon, you know this one.

If all else fails, there's always old faithful.