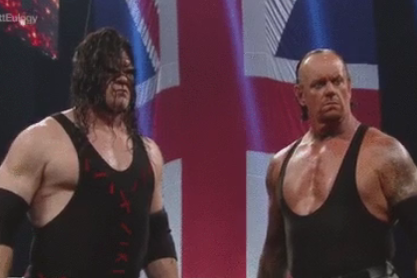 The Undertaker and Kane returned to WWE on Monday night, exacting revenge on Bray Wyatt and the Wyatt Family.

The first show of the post-Seth Rollins championship era took place from Manchester Arena in Manchester, England, as the main roster is currently on tour in Europe. This episode would prove to be huge in the new direction of WWE since their champion will be missing a lot of time, and likely won’t return until summer 2016.

The beginning of a 16-man tournament began on Monday night, with some good matches, albeit predictable ones. However, the biggest story of the night kept building each time they showed clips of the Brothers of Destruction, The Undertaker and Kane, throughout their respective careers. It was as if they were saying goodbye to them. That wasn’t the case at the end of the show.

The Game, Triple H, made his way out to the ring to announce a tournament that would be held over the next few weeks of television, culminating at Survivor Series, after Seth Rollins was forced to vacate the WWE World Heavyweight Championship last week. However, before the tournament began, H had an offer for a guy who he wanted to make “his guy,” like Rollins was “his guy.” He called out Roman Reigns and built him up as much as he could, and wanted Reigns to become “his guy” next.

But, that was not meant to be. Reigns wasn’t about to be given the championship without earning it, and decided he’d rather participate in the tournament. His first opponent? A big guy.

Yeah, we were treated to another Reigns-Big Show match. Another one that sucked and was plainly boring. But, hey, it got Reigns his win and advanced him in the tournament and we can forget about the Big Show. For now.

Unfortunately, Cesaro will square off with Reigns next Monday. Doesn’t look good for the Swiss man.

After Ziggler won his match, there was a very real possibility that Breeze would win his against Ambrose, setting up a second-round match between the two rivals.

Here is the current tournament bracket: 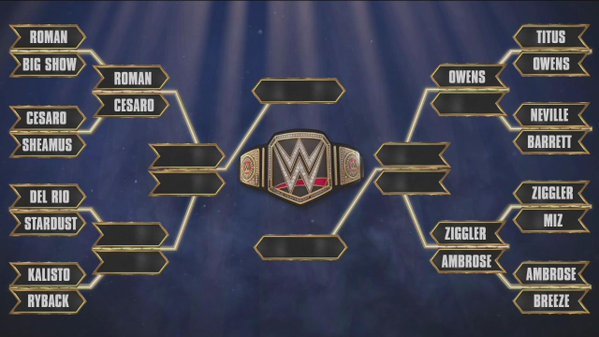 So, Bray Wyatt was set to pay tribute to the apparent lifeless souls of The Undertaker and Kane in the night’s main event. Throughout the program, various clips showing the respective careers of the Brothers of Destruction seemed to foreshadow that something big was going to happen at the end of the show.

As Wyatt stood in the center of the ring, claiming to be the new supernatural force in WWE, showing clips of Undertaker and Kane in their better days, it happened. The lights went out. Lightning struck. Fire breathed out of the ringposts and the stage. The ever familiar gong hit. Then it hit again. A third time was the charm, as the Dead Man and his brother, the Big Red Monster, made their way down to the ring. As they were about to confront Wyatt, the lights went out, and then back on, and Wyatt’s backup was there.

They were no match, however, for the legends. Fighting off the attacks by Harper, Rowan and then Strowman, the brothers chokeslammed Wyatt in the middle of the ring. They would walk back up the ramp, look back, and then raise their arm in the air as the program left the air.

It was awesome. Nobody would be able to say anything different. Wyatt’s been looking strong ever since Hell in a Cell, and for The Undertaker and Kane to make their return should only end up the way it did – completely destroy the Wyatt Family. Otherwise, how will the Wyatts now respond? Some people out there probably think the Wyatts were buried in that segment. I really don’t know what they’re watching, or what they want to happen.

If you’re one of those people that think this didn’t come off well for the Wyatts at all, I’m not sure you’ll ever like anything WWE does ever again. Remember, it’s part of a story. Having the Wyatts go over at each turn, despite how bad they’ve been used the last couple years, does them no favors. This was a good way to end Raw, and leaves the door open for more appearances on television for The Undertaker and Kane as we arrive at Survivor Series.

I like that Alberto Del Rio and Zeb Colter have a knack for just pissing off the crowd. They can do it in America, the United Kingdom, or even Japan. On Monday night, they explained why the U.K. couldn’t be a part of MexAmerica, much to the chagrin of the audience, saying the U.K. is hated around the world. It was awesome.

King Barrett, who accompanied Sheamus to the ring for his first round tournament match against Cesaro, called out English soccer hero, Wayne Rooney, simply to get some heel heat because he’s British and would’ve been cheered loudly otherwise.

That’s a good heel right there.

I love when WWE goes overseas, because the crowd tends to react in the opposite way it wants. Paige was in action, and she’s from England, so she got a big ovation even though she’s technically a heel. She lost a match to Becky Lynch, and then when she attacked her and the Divas Champion, Charlotte, came out to make the save, she got booed mercilessly. Not exactly the smartest booking in terms of needing a certain crowd reaction.

The only thing that sucks isn’t New Day, it’s that New Day isn’t in the title tournament. But they’re still amazing.

• Becky Lynch d. Paige by pinfall via a rollup. Paige attacked Lynch and put the PTO on her on the announce table. Charlotte made the save, to a chorus of boos.

• Natalya d. Naomi via a rollup. Team B.A.D. attacks Natalya after the match.

• WWE World Heavyweight Championship First Round Tournament Match: Cesaro d. Sheamus by pinfall via a rollup after a European uppercut. Both Sheamus and King Barrett were provoking Wayne Rooney at ringside.

• The New Day (c) d. Neville and The Usos by pinfall after Big E hit Neville as he was going for the Red Arrow, allowing Xavier Woods to roll him up [with his feet on the rope] for the pin.